The Fog Of War

One curse of the internet age is that rather than having too little data to work with, the situation for much of my youth where you had to dig through dusty volumes in libraries to find what you wanted, instead we find ourselves drowning in data. Worse, much of it is bullshit.
So what is going on in Ukraine? The reports are incredibly muddled right now. We have some preliminary casualty numbers but those seem awfully low. Where are the Russian troops? Are the Ukrainian forces even fighting back? How long will this go on?
Right now those questions are impossible to answer sitting in front of a computer in Indiana, or anywhere else in the U.S. with some high clearance types excepted. That isn't stopping lots of speculation and general idiocy.
We have Ukrainian Jew Alexander Vindman demanding that Americans go die to protect Ukraine. Mitt Romney is somehow blaming this all on....Trump and "America First" even though this happened after Trump left office and Russia annexed Crimea in 2014 when Obama was in office. 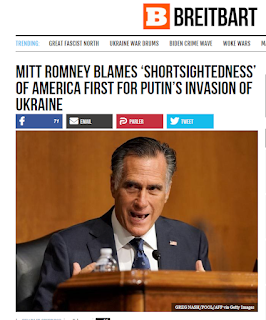 Also worth pondering. Since the U.S. is pretty much doing nothing other than finger-pointing at Orange Man Bad, it is confirmation of what most people already knew: the U.S. is rudderless at this point. No one is in charge. While Trump was speaking about the invasion in his usual Trump-way last night, Biden was...apparently in bed. We might hear from him for real this afternoon while some staffer sends vague, meaningless tweets out on his behalf in the interim. What could a leaderless U.S. lead to?

That could be a major flashpoint. The ChiComs (rightly) sense weakness, so if they are going to take their shot at Taiwan, now is the time. Not only is Biden compromised on Ukraine thanks to his crackhead kid getting millions for selling access to the Obama White House, he is also owned by the ChiComs. You probably didn't see this story.....

I am sure that when Da'quandidlio punched some random Asian on the street, it was because he was upset about Chinese spying and not just an innate tendency to random violence.
"Our goal with this strategy is to take a comprehensive approach that draws on the full extent of our tools and authorities to address the alarming rise in illegal activity from hostile nations," Assistant Attorney General Matthew Olsen of the DOJ's National Security Division said. "This includes growing threats within the United States and to Americans and U.S. businesses abroad."
Instead of countering the widely documented spying by China, the Biden DOJ is pivoting right back to the real threat: White Americans. But a full-scale assault on Taiwan might force the Biden admin to do something and that is a much greater threat than a regional squabble in Eastern Europe.
Gas prices are sure to rise, Bitcoin and other cyrpto is getting hammered, precious metals are having a good day. All predictable. This guy gets it. 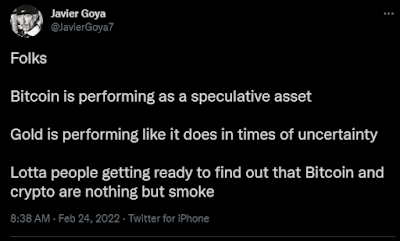 As always, be skeptical, check your sources, don't believe everything you see on social media. Lots of reports of Ukraine using old footage to claim mighty victories against the Russians. Most of what you see is bullshit, treat it as such. Also as always, this is a good time to check the pantry and the gas tank and see what you might need to bolster. This could blow over quickly or it could get awfully ugly, we are only 12 hours into this and Biden hasn't even had his first Ensure/Metamucil cocktail of the day.
Posted by Arthur Sido at 9:54 AM