The Change In American Gun Culture

Turning 50 is a great excuse for retrospective posts.... 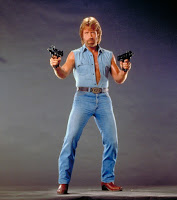 One of the things that seemed anachronistic to me in my journey through Lucifer's Hammer are the firearms. Written in the 70s there is very, very little detail on the guns other than "shotgun" or "pistol". Later in the 80s we started to see more focus on the specifics of guns as firearms like the Uzi and MAC-10 became really popular in movies like Chuck Norris in Invasion U.S.A., and Arnold in the Terminator movies and untold numbers of other 80s action flicks.
By the way, how can you hope to survive what is coming if you can't pull off this look?
As a kid in the 1970s and 80s I was surrounded by the contemporary gun culture of that era. One of the enduring memories I have as a young kid is my uncle Greg re-enacting shooting a deer each year at Christmas at my grandma's. Later when I was in my teens I would go bird hunting with my dad, my uncle Greg and uncle Bill and my dad's best friend and my namesake. We shot sporting clays and would shoot targets in the sand pits of northern Michigan. I became comfortable with shooting at an early age and learned firearm safety as a rite of growing up.
Our house had a wooden, glass front gun cabinet that wouldn't have withstood a firm yank but it kept me out of my dad's guns until I was old enough to know where the key was kept. I saw it every day and the guns it held. That same gun cabinet is sitting in our house right now, we use it for other stuff and keep the guns in the safe, but I still have it.
I also remember what was in the gun cabinet. My dad's .22 semi-auto rifle, the 20 gauge 'Matador' Spanish AYA (Aguirre y Aranzabal) side-by-side he bought as a young man with money he earned, and his Ruger semiauto .22. Later he would add a S&W .357 to the mix and I remember the night we went to the local gun gun and bought it. In the 80s a stainless steel .357 magnum revolver was about as cool as it got. Eventually he acquired some nicer shotguns and purchased a gun safe but I can still picture the gun cabinet and the firearms he had.
That mix of guns was pretty typical. Almost everyone I knew had a dad who owned guns, usually at least one pistol, a rifle (often a deer rifle of some sort) and a shotgun. I didn't know anyone who owned an AR-15. No one had a striker fired polymer 9mm with a 15,17 or more round mag capacity. Most home defense pistols were revolvers of some sort or maybe some hammer-fired 1911s or Browning Hi-Power type of guns. In fact I don't think I ever even held an AR until fairly recently.
My own collection as an adult was heavily weighted toward a similar mix. I had shotguns for hunting and sporting clays. My wife who is a little older than me purchased a .357 stainless revolver when I was still in high school. Later in college I bought a .40 caliber Smith & Wesson Mod. 411 like this one, my first semi-auto pistol. 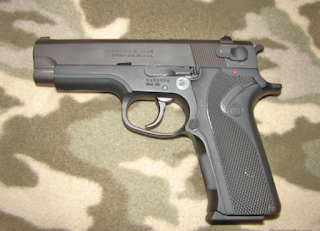 I didn't even own a single rifle until I bought a Browning A-Bolt in .300 WinMag after college and a Ruger Mini-14 in response to the Clinton era gun ban.
Again, that was fairly typical of gun ownership in the 70s and 80s. This is reflected in a book like Lucifer's Hammer that is far more interested in character development than in lengthy descriptions of tactical gear and weaponry.
I don't know when to pinpoint the era when gun ownership moved away from "revolver in the nightstand and 30-06 for deer hunting" mode and into "half dozen AR-15s and enough handguns to equip a small city police force" but it has been a gradual change. Look at the NICS check annual data for background checks.... 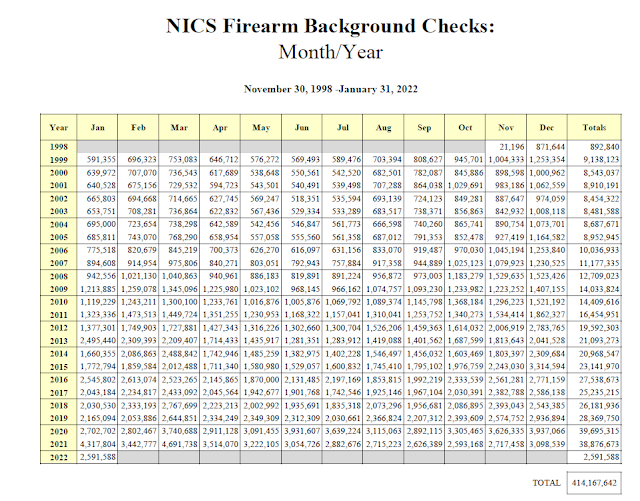 Under 10 million a year from 1998 through 2005, the first year of the Shrub administration's second term. Then it starts to climb. And climb and really, really climb. There were more background checks last year than the first four years of NICS checks combined. And there were even more in 2020.
People started to buy a shitload of guns breaking 20 million background checks in 2013, the beginning of Obama's second term and there haven't been fewer than 20 million per year since.
Not only are people buying a shitload of guns, the guns they are buying a very different from what I grew up with.
Of course people are still buying hunting rifles, shotguns for bird and clay shooting and wheelguns for the nightstand but that isn't most of what they are buying.
AR-15s, AK-47s, 9mm handguns with mags holding 15+ rounds, cheap and reliable magazines for all of the above. The reliability of even cheap handguns is remarkable. The amount of restrained sheer firepower in civilian hands is unlike anything ever seen. There isn't a precedent for the level of civilian armaments owned in the modern era and you can bet that weighs heavily on the mind of our would-be overlords.
Not only that but concealed carry has exploded in America. No one I knew carried a gun when I was a kid but today? According to the USCCA, over one million permits for concealed carry have been issued in my state of Indiana, a state with a population of under 7 million or around 16.7% of the population.

Since about one quarter of residents are under 18, that mean that there are around 5 million adult Hoosiers so more than 20% of all adult Hoosiers have a carry permit. Utah has a 21% license percentage so we need to pump our numbers up.
Even though we have perhaps a million Hoosiers carrying legally at any given time, there has not been the often warned of bloodbath in the streets. There has been a significant uptick in murders, especially in Indianapolis, but almost all of those are committed by blacks who are generally illegally carrying, not by the licensed carry holders. In most states the push is to increase the ease of concealed carry, not make it more restrictive, although in the usual states like California, New York and Washington state there are new gun restrictions endlessly popping up.
Regular law-abiding Americans are armed to the teeth and carrying those firearms with them in public. No longer are guns something relegated to a rack over the fireplace or the nightstand.
Gun culture in America has always had something of a rugged individualist streak to it but in 2022 people aren't buying rifles to shoot a big buck in the fall and a pistol "just in case". The average gun owner is now more akin to the most rabid survivalist of the 90s. It is less about being an outdoorsman and more about expecting that some people are going to need to be shot.
The people we sell to typically have the same basic attitude: things are coming apart and they want to be ready for anything when it does. I rarely speak to an optimistic customer, everyone who has something to say is saying something ominous. This is important: they aren't excited about it or eager for it to happen but they are just being realistic based on what they are seeing.
Regular Americans are terrifying to the elites and with good cause. We are law abiding and long suffering but not endlessly. We are also in possession of the greatest arsenal of small arms mankind has ever seen. They are right to fear us.
Posted by Arthur Sido at 8:14 AM