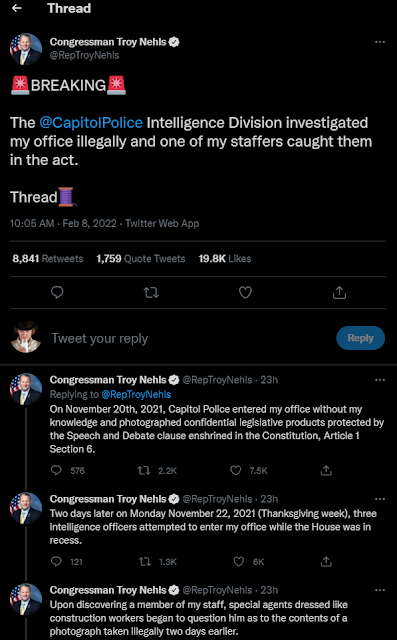 The Capitol police:
- Entered his office without permission or notice.
- Photographed documentation without permission.
- Tried to enter again
- Were disguised as construction workers.
This raises some questions:
- Primarily, who was ordering them to do this?
- Just as critical, why would members of a law enforcement outfit charged with protecting Congress agree to act as spies?
- Who were the photographs delivered to?
- Who will investigate the Capitol police?
If this had happened to a Democrat while Trump was in office? The media would be blaring it from every corner, demanding another ritual "impeachment" of Orange Man Bad.
Richard Nixon was forced to resign when it was discovered that he had knowledge of the Watergate burglary. Want to wager on whether anyone in a significant position will be punished for this or that anything will happen at all?
Even the pretense of living as a nation of laws has evaporated. We are in a de facto dictatorship and therefore this government and all of the laws, edicts and declarations it makes are illegitimate.
Posted by Arthur Sido at 10:29 AM