Just a few for your perusal.
One of the least surprising headlines you will ever see: 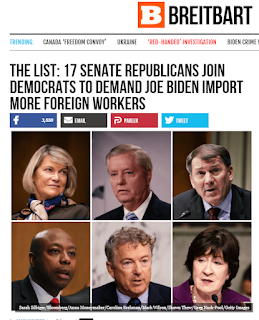 If you wonder why Trump never accomplished anything, it was partly because he underestimated how much resistance he would get from his own party. Note also that Rand Paul is one of the signers. This should remind you that libertarianism is a suicide cult.
Another story you can figure out just based on the headline:
District Identifies Person Responsible For Racist Graffiti Found At McClatchy High
Another White supremacist no doubt!
Last Friday, someone wrote the words “White” and “Colored” over water fountains at McClatchy High, a reference to the Jim Crow era. The district’s race and equity monitor, Mark T. Harris, told CBS13 a Black female student confessed to the vandalism and cameras caught her in action.
Oh. Don't worry though, it wasn't racially motivated....
Harris stopped short of calling it a racially motivated act.
“I don’t believe those words that were on those water fountains were racist,” Harris said. “I do not believe they were hate crime or hate speech. Part of it quite honestly is because the admitted perpetrator is a young African American woman.”
At least he admits that there is a different standard for White students and black students. A White student would have been immediately expelled for doing this.
A war in East Europe would go great for us.
The US is not Ready for a Peer to Peer Fight in Europe
This is the money quote:
The US National Military Strategy is as much a defense industry-driven wish list of combat systems they want to build, as opposed to a threat-defeating strategy based on US Ground Forces out-matching our peer military adversary.
The U.S. military buys gear based on what they are told to buy by the MIC with apparently little consideration for whether the gear a) actually works and b) is what is needed for future wars. That is a great way to run an armed forces. I still suspect that in an extended war the U.S. technological superiority would eventually win out but at what cost? We haven't had a steady stream of planes coming home packed with flag draped coffins for a long time, not since Vietnam, and I don't think Americans have the stomach for that in 2022.
If I didn't know better, I might suspect that we have been getting scammed all along.
The CDC is hiding data showing vaccines don’t work
You don't say?! No wonder this guy is banned on Twitter.
Enjoy!
Posted by Arthur Sido at 4:42 PM