Let's Play "Guess The Mugshot" From The Headline!

Server shot in face over missing hamburger recalls ‘bleeding out’
A few more clues....
Twin sisters in Wisconsin are facing attempted homicide charges while the restaurant worker they are accused of shooting and beating is recovering in a neck brace.
Anthony Rodriguez, 26, says he was the only server working around midnight Jan. 30 at a George Webb location in Wauwatosa, Wisconsin. He says a few customers became upset over an incomplete order and were asked to leave, but instead, one of them opened fire.
Shot in the face over a $3 hamburger, Rodriguez says he thought his life was over. One of the customers stomped his face while he was on the ground after the shooting.
Give up yet? Who could it be?
Aw, you already figured it out.
Police arrested 20-year-old twin sisters Breanta and Bryanna Johnson.
The lovely ladies in question.... 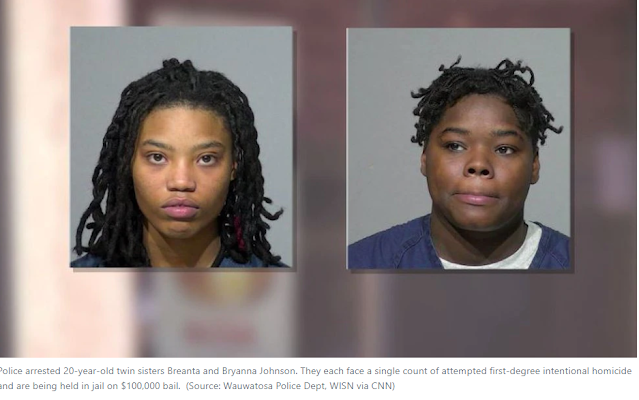 What a pair of charmers!
Not bad enough to have a fit about a missing burger. Not even enough to shoot the poor bastard in the face. Nope, one had to stomp on his head after he was down and on the ground with a bullet hole in his face.
You knew who it was before you even read the post. Only one racial group consistently is responsible for these temper tantrums that turn into lethal violence. All of us have had orders screwed up at restaurants but we don't shoot people in the face and then stomp on their heads afterward. That is because we possess a level of basic human decency. These two? They would have killed a man because of a shitty burger.
Look at their faces and see the utter lack of any humanity.
Posted by Arthur Sido at 6:11 PM