It Was Never About Class

Another excellent segment from Tucker Carlson. Canada is a failing regime but so are virtually all Western regimes and the ruling class is desperate to delay the collapse.
An important part was in the first few minutes when he was talking about Mark Carney, a globalist mouthpiece attacking these truckers, working class people one and all, from a position of privilege and authority. 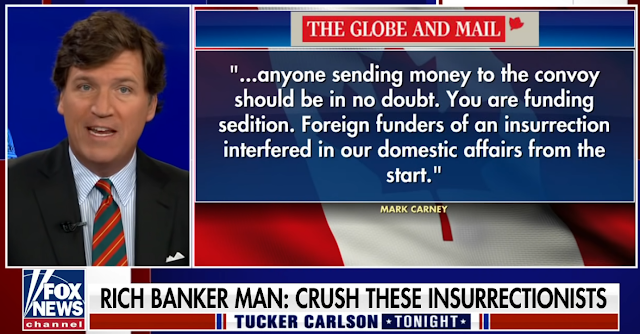 An insurrection! Sedition! Remember when the Left used to decry such language when it was applied to the people Joe McCarthy was investigating, rightly as it turns out because they were Communists? Also notice how the Left uses the same talking points over and over again, and no wonder because it works.
People entering the Capitol without permission and breaking a couple of items?
Insurrection!
People burning down buildings, public and private, all over the country in response to a drug addled violent felon dying of heart failure?
Mostly peaceful protests.
People demonstrating in their own national capital and honking horns?
Insurrection!
People forming a violent Communist "autonomous zone" run by nutjobs and criminal warlord?
Look, they have a garden!
Back to Mark Carney.
Truck drivers are the salt of the earth if any group ever deserved the title. They do a thankless job, driving hour after hour in all conditions, hauling around the stuff we need to make stuff and then taking that stuff somewhere to be sold. They truck our food and our TVs, our Fruit of the Loom boxer shorts and gas to refill the tanks at stations and they do it with little compensation relative to other, less useful professions. During the worst of the "pandemic", they were lauded as heroes for delivering our toilet paper but now that they are speaking out against their betters they are dangerous and probably racist to boot.
Mark Carney? This piece of shit went to Harvard to get a degree in economics before doing post-graduate work at Oxford. His doctoral thesis is titled "The dynamic advantage of competition", which is amusing coming from a guy who doesn't know anything about the real world. He worked for 13 years for Goldman Sachs, a firm that knows so much about competition that it got a ten billion dollar bailout for monkeying around with subprime mortgages. He then worked as a Governor for the Bank of Canada and then the Bank of England. These days, apart from shitting on working people in Canada, he has new job as the "Vice Chair and Head of Transition Investing", whatever the hell that means, at a firm called Brookfield. 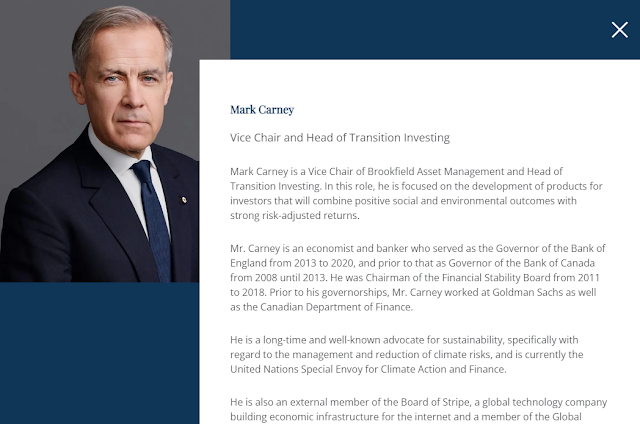 He has a particularly punchable arrogant mug, doesn't he*? His job is to invest in products that "combine positive social and environmental outcomes with strong risk-adjusted returns". You might wonder what the actual fuck that means. What it means is finding investments that are dressed up as socially responsible while utilizing government graft and corruption to bring huge returns. Stuff like subsidized solar power I am guessing. How do you do that? This is how.... 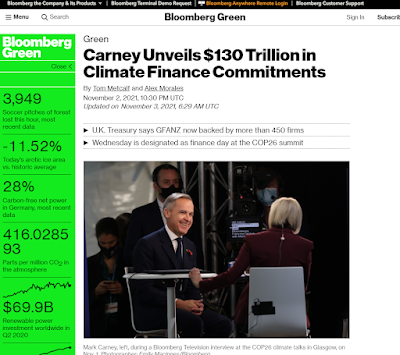 Wow, where are they getting $130,000,000,000,000 you might wonder? Not from their own pockets, at least not without getting some return on their investment. No, it is safe to assume that the real funding will come from various governments, by taxing their citizens, and that Carney and his friends will find ways to siphon off billions of dollars of those "climate investments" as profit, profits that they can claim have "positive social and environmental outcomes". The only thing positive is that Carney doesn't give two shits about the environment, he just knows he can use the climate change hoax as a way to drain money from regular people to line the pockets of him and his buddies. This is the same guy who bemoans "income inequality" while he works for a huge investment firm that caters to the very wealthy and is himself incredibly wealthy, and not looking to give it away. He talks about social justice but the leadership page of his firm has over 200 people listed and most are men and White, with some Asians scattered about. There are a grand total of 2 blacks, or less than 1% of his firm's leadership. See, positive social outcomes are great as long as you don't have to hire a bunch of blacks that screw up profits.
I. Hate. Phony. People.
Like most people who talk about the environment and social justice, Mark Carney doesn't really mean it or care about it. It is just his shtick that gives him cover for being a blood-sucking parasite, proving that being a parasite is not restricted to one ethnic group. He is really no different than Karl Marx who yapped incessantly about "the workers" while never working a day in his life. Mark Carney has been in the halls of privilege all of his life and doesn't know a thing about the little people, other than they are easy to fool while you are robbing them. Marx didn't want to eliminate class, he just wanted to change it to a system with a bureaucratic ruling class and the rest of the people in the peasantry.
Just like Marxism was never about class, and "climate change" was never about the environment, Covid-19 was never about public health. It was just the latest way for elites to seize more power and wealth for themselves while crushing the rest of humanity.
Why do we let people like Mark Carney, a man who has made untold millions while never doing a single useful thing in his working career, tell us what to do? What makes his opinion worth more than a truck driver? 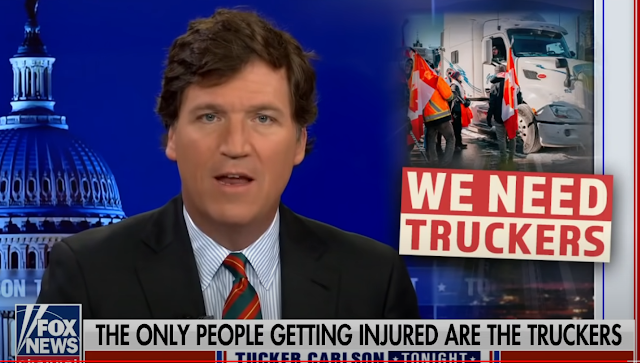 Tucker isn't working class either but he understands this: we need truck drivers. We need farmers. We need all of those hard, dirty professions to keep things running in this country, our lights on, our plates full of cheap food, our latest consumer good arriving on time. We need truckers and we actually need a lot more than we currently have. In fact there is a serious shortage of truckers that is just getting worse (this is also true of farmers and many skilled tradesmen).
You know what we don't need more of? People with job titles like "Vice Chair and Head of Transition Investing" and others of that ilk. In fact, we don't need even one of them. Just think....
If every truck driver in America and Canada disappeared overnight, we would almost all starve or freeze to death in a week.
If every person working in financial services, including even bank managers (as a former manager of several banks), disappeared overnight? No one would notice or care, probably not even their trophy wives at least until the stores stopped accepting their AmEx card.
Something to consider....
What these elites are realizing, or more likely already knew and just hoped we didn't figure it out, is that they don't really run this country. They rule the country but they don't do anything that is even mildly useful around here and in general the opposite is true, they make life worse for most people. A few people, but more each day, are waking up and realizing that we don't need these "leaders" and the elite few are generally scoundrels and most are outright evil. Not all of them are demon worshipping pedophiles but enough of them are to make you question why we let any of them lord over us in the first place.
Should a trust fund baby who has never worked an honest day in his life be dictating how you live? Some morbidly obese Karen in HR doesn't have any business dictating stupid rules to people who make the company money. A scrawny Jewish hedge fund manager in New York who can't change his own tire should keep his mouth shut about how I live.
As a word of caution, the trucker strike or whatever you call it in Canada isn't going to change much of anything. Soon they will go back to trucking because people like that, and like me and like you, work for a living. We aren't professional agitators and protesters. The powers that be will resume doing what they are always doing, maybe a little slower at first, but inexorably. Civil disobedience doesn't stop them, it barely slows them down, but it does help wake people up for the real fight that won't be waged by honking horns. Don't be surprised when this melts away in another week or so.
The important take-away from this is part of the broader picture that has emerged quite clearly over the last decade, and that is that the global elite is engaged in a war against the rest of humanity. During the 20th century regular people got uppity and started to enjoy their upward mobility. Sometimes the little people would intrude on the playgrounds of the rich and make a tacky mess of things. That had to stop and it is stopping as we speak. Right now there is less room for normal people to get ahead in America than at any point in my lifetime. The American dream is being stamped out by people who, not coincidentally, hate regular Americans (and Canadians and Europeans and Australians...).
Republican and Democrat, conservative and liberal, those are just names given to two sides of the same coin and used to distract us. The real struggle is between the oligarchs in business, government, academia and entertainment versus the rest of us. We have been losing this struggle for the better part of a century and only now are we starting to see some mass pushback.
When you are looking for enemies, your list shouldn't start with people like Nancy Pelosi, Joe Biden or Alexandria Ocasio-Cortez. They are just puppets and figureheads. No, your list should start with people like Klaus Schwab and Mark Carney. They are the face of the evil that rules behind the curtain.
* Not a recommendation to punch him if you see him. Also not not recommending that.
Posted by Arthur Sido at 5:25 PM