Deism: Don't Be That Guy

Religion is for most people their most important defining characteristic, something that speaks deeply to who they are as a person. Your religious faith defines how you relate to the world, the rest of humanity and even how you view yourself. Needless to say, when something shakes or changes your religious faith it causes a seismic change in people. Deciding to change the football team you root for isn't quite the same as rethinking your place in the cosmos.
Different people react differently to these changes. Many fall into apathy and depression. Others wander aimlessly trying different stuff only to discard the latest and greatest when they find something else new. They try to replace their former certainty with a new certainty.
Of course we all probably know "That Guy", the guy who leaves his religious faith and then sees his life's mission as telling everyone he meets that he left that faith and why they should too. It typically is exhibited in an obnoxious, know-it-all attitude. No one likes That Guy and no one really listens to them either. In religious circles they are the equivalent of vegans. You know the joke "How can you tell someone is a vegan? Just wait a minute, they will tell you". The same holds true with That Guy, no matter what he will find a way to work into the conversation that he used to be ignorant but now is super smart.
In my own religious journey I was That Guy for a while, specifically when we got out of mormonism. My opinion of that religion hasn't changed much, I believe it to be a very polite and wholesome appearing religious cult. I spent a lot of time and effort after we left mormonism and joined the evangelical Christian faith telling people that mormonism was an anti-Christian cult and helping to equip people to witness to mormons in an effort to get them to leave their faith. I still think you should leave mormonism, not because it is a heretical sect that denies basic Christian truths, but because it is a genuine religious cult that engages in mental and emotional manipulation.
Anyway, when I walked away from organized religion I quietly decided on my own to not be That Guy. I am not interested in convincing anyone to abandon their faith, rather I am simply exploring my own in this public forum. While I am happy to talk about why I have turned my back on organized religion, I am not seeking out people to tell them why they should too.
Far too often what I see from people who have changed or abandoned religion is a grotesque overreaction in the opposite direction, the "I used to be a fundamentalist evangelical but now I support homosexuality, abortion and feminism. Oh, and Orange Man Bad!". If you leave what you see as the cult of fundamentalism and replace it with the cult of wokeness, you aren't any better off and probably are in a worse place.
Being angry and resentful and mocking people for their deeply held faith might help fill the void in your personality but it doesn't help anyone else. No one is interested in the opinions of an insufferable asshole. I can say that with some authority. 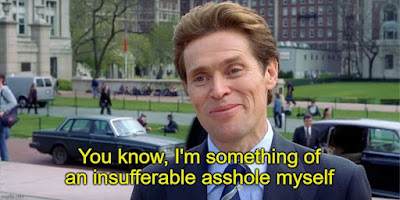 It doesn't really matter what the specific circumstances are. If you used to be a liberal but now are a conservative or vice versa, or grew up Catholic and then became Protestant or vice versa, or were a fundamentalist but now you're an atheist. Whatever, just don't be That Guy.
Posted by Arthur Sido at 7:00 AM