Every year in February we are treated to the cringe-fest known as "black History Month". It used to be "Negro History Week" which still seemed to be 8 days too long, but in the 70s it became an entire month.
If blacks possessed a little more self-awareness, they would understand that the whole exercise is just pandering. The same people who post dumb shit about "the contributions of black Americans" are also living in all-White neighborhoods, maybe with some Asians and Jews for flava, because they know that the primary contributions of black Americans has been urban violence and shitty schools. 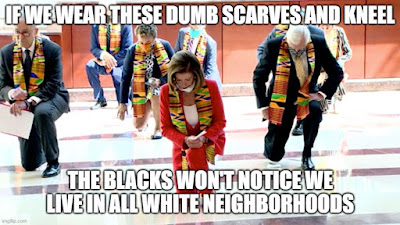 So corporations change their profile to add some colorful faux African emblems and some fat White dork in a cubicle surrounded by other fat White dorks and Indian code monkeys posts some stuff on their social media accounts and everyone pats each other on the back. I saw a great example on Amazon a couple of days ago....

black is truth? Pardon my French but what the fuck does that even mean?
The beauty of it is that it doesn't mean anything. That is the point, it just an empty slogan so ridiculous that it doesn't even warrant explanation. Just being real, how many of Amazon's Audible book customers are black? That is the other critical point. None of this is aimed at blacks, it is all aimed at guilty Whites who think that if they patronize businesses that pander about black History Month it will give them some cover for avoiding blacks like the plague. That is what this is all about. Africans living in America are 13% of the population and generally speaking are some of the poorest people in the country. The consumers that corporations are trying to lure with their pandering are White people, especially upper middle class Whites in suburbs. Generally speaking, it works.
Many later White immigrants have a similar story. Our people came in the 19th century or early 20th century, in my case from Poland and Ireland. They were poor and had nothing but dreams. When they arrived they didn't even speak the language in many cases and were dealing with prejudice and hostility from the current residents of America. Despite the obstacles, they learned the language, worked their asses off, saved and scrimped so their children could have a better life. And they did, as each progressive generation of Irish and Polish and Italian families built businesses and proved their value to this nation, they became Americans. Sure I can't trace my lineage back to the Mayflower but then again many of those genteel patrician families on the East Coast turned out to be some of the worst enemies of White people in America.
But blacks? 150 years after slavery they are for the most part little better off than they were. Their history in America has been an endless series of tragedies and the further we get from slavery, the more the tragedies are self-inflicted. Other than the small percentage of blacks who have escaped from their ghettos, most blacks in America seem perpetually stuck in a declining state of ignorance, anger and violence marked by incarceration, poverty and chimping out at Golden Corral....
Mmmm, dat Golden Corral steak is worth fighting over!
Other than a few exceptional individuals, what is worth commemorating in the black experience in America?
Perhaps if blacks had an honest accounting of their history they could see it as something to overcome and get better from, like many European immigrant groups, instead of trying to recreate their history to be something it was not. Instead of falsely laying claim to the achievements of others (We Wuz Inventorz An' Sheeit), recognize that they have been an anchor holding America back for 150 years but striving to do better in the future. That will never happen as long as liberal Whites convince them that they are victims and even convincing blacks that they were the real driving force for everything America achieved and built. The cognitive dissonance must be intense when you think you are part of a race that invented and achieved so much but you look around at your people and see nothing but misery and violence.
Behind their backs, most White people think this whole black History Month is a joke but blacks aren't in on the gag.
That all sounds harsh and hateful but no one has ever been helped by a comforting lie. If we were allowed to tell the real history of blacks, they would cancel black History Month immediately.
Posted by Arthur Sido at 9:08 AM