But Muh Crypto Will Save Me!

This isn't intended to be insulting to anyone, but I simply don't get how cryptocurrency is seen as this silver bullet to smite The Man. While it does provide a certain level of anonymity at the most basic level, it still has to travel over the intrawebz and that means there are chokepoints where the people who ultimately control the internet can get involved. 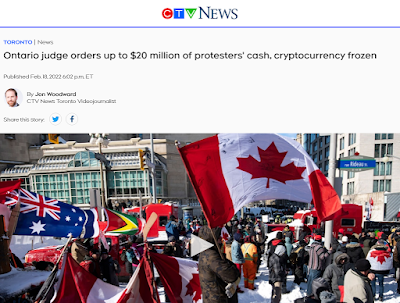 Ontario judge orders up to $20 million of protesters' cash, cryptocurrency frozen
As police worked to arrest organizers of the convoy blockading Ottawa in downtown streets, a different kind of enforcement was playing out in court, where a group of citizens secured an order freezing millions in assets belonging to convoy fundraisers and organizers.
Convoy leaders are now restricted from moving as much as $20 million in assets tied to the occupation, from bank accounts to fundraisers to cryptocurrency assets, in what’s known as a mareva order that is in effect worldwide, according to the order issued by Justice Calum MacLeod.
“It’s the first time in Canadian legal history that bitcoin and cryptocurrency has been subject to a freezing order,” said the lawyer for the class action, Paul Champ.
I am not sure how the mechanics of seizing crypto would work but I imagine it is possible to accomplish depending on how you purchased and hold your cryptocurrency.
While I am not saying the crypto has no utility, it certainly has limits and those are on display. If the government of Canada can seize your bank accounts, which is easy, and your crypto, which is harder I assume, then it really should change your notion about how much of "your money" is really "your money".
There is a reason that they have been pushing so hard to get us to stop using cash and do all of our business electronically and it isn't for your convenience nor is it a fulfillment of some goody eschatology. It just makes it really easy to control people by controlling their ability to buy groceries and gas.
Do you have a moment to talk about Our Lord and Savior Tangible Assets?
Posted by Arthur Sido at 5:13 PM