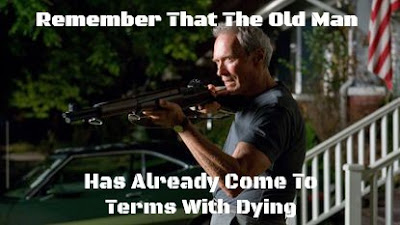 Yeah, that is far more dangerous than a squeamish 30 year old who won't pull the trigger.
Get your mind right. Most of us are already 90% of the way there, decades of watching our country go into the shitter has hardened our hearts and many are like me, no longer with little kids to provide for. I am not going to jail but I am also not really all that worried about dying, even at 50, especially if it means that my death serves the purpose of the interest of my family and my people.
So don't assume that passing your 40th or 50th or even 60th birthday means you are out of the game. Your role might change and you need to be realistic but a 55 grain projectile travelling 3000 fps from the barrel of a gun held by a 60 year old is just as lethal as it would be from the same gun fired by a 25 year old.
Posted by Arthur Sido at 10:37 AM