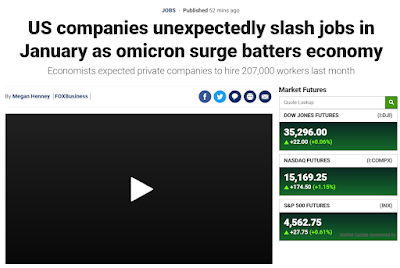 Instead of adding jobs, it went the other way....
Companies shed 301,000 jobs last month, sharply missing the 207,000-job gain that economists surveyed by Refinitiv had predicted and a major drop from the downwardly revised gain of 776,000 in December. It marked the first time that ADP reported negative growth since December 2021, when companies shed 123,000 jobs before the vaccines were available.
Economists were only off by half a million jobs. Solid work boys! I am sure Jen Psaki will be on the air to tell us why losing jobs is actually a sign of a healthy economy, just like raging inflation is great for working people.
In other positive news
Morning Greatness: National Debt Surpasses $30 Trillion for First Time
$30,000,000,000,000
That is a number so huge as to be meaningless but that has been the case many trillions ago. All of that "debt" represent made-up "money" that has been fueling our consumption based economy for a very long time. How long can an economy survive when you don't make anything and it only survives by buying cheap consumer goods with debt? We are all going to find out, probably sooner rather than later.
Posted by Arthur Sido at 9:59 AM