Being Fat Is Bad For Your Health? Who Knew?

Lots of these sorts of "news" stories cropping up this morning, no doubt driven by the need to hit a certain quota of black-interest stories in celebration of "black history month". 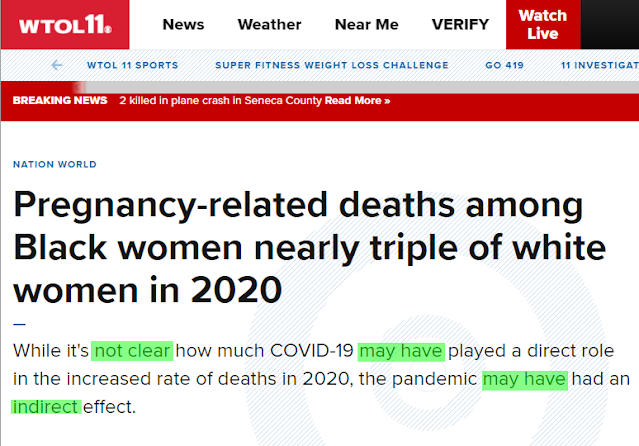 Notice the highlights. Talk about coming out and basically saying this is all bullshit without actually saying this is all bullshit. Also, note the term "pregnancy-related". What does that mean?
Overall in 2020, there were almost 24 deaths per 100,000 births, or 861 deaths total — numbers that reflect mothers dying during pregnancy, childbirth or the year after.
Emphasis in red is mine. If a woman dies within a year of having a baby, it can be counted as "pregnancy-related"? My wife has had 8 children so I know a little about the topic and it seems to me that the only way a woman dying 11 months after giving birth can be considered "pregnancy-related" would be if she was bludgeoned to death with her baby. Otherwise how meaningless can this term be?
Anyway, the story dances around, making innuendos about "structural racism" and a lack of health care for poor people in America, one of the most pampered groups in the world when it comes to access to health care. You have to go all the way to the end of the story to get the real story:
The U.S. maternal mortality rate has more than tripled in 35 years. A decade ago, it was 16 deaths per 100,000 births. It has climbed along with rising rates of obesity, heart disease and cesarean sections, which all increase risks for people giving birth.
Oh, so this is just part of a trend that has been in progress for at least 35 years and is being driven primarily by being lard-asses? Why didn't they just come out and say that?
Obviously because saying people are fat and this is bad for their health isn't useful for a story during "black history month". It also raises another uncomfortable fact: black people are generally speaking more likely to be obese than other races. This was a different story today from the same "news" outfit, WTOL in Toledo. Apparently they didn't notice that the family shown is full of morbidly obese black wahmen, and that might have something to do with their risk of heart disease. I am not a doctor or anything so that is probably just me being racist. I covered this is a prior post, Pandemic Of The Fat Women Of Color, so I won't rehash the whole thing here but the bottom line is that blacks tend to be the fattest significant racial group in America and it isn't even close. In 35 states, black obesity rates are at least 35%. I wonder if that has anything to do with their health problems?
Nah, it must be the genetic memory of trauma from slavery and Jim Crow laws. Just tear down more statues and name more streets in bad neighborhoods after MLK and this will all go away.
There is no small amount of irony in the realization that people trying to celebrate blackness are actually hurting blacks by attributing their health problems to "racism" instead of to poor lifestyle choices that are easily corrected.
Don't be a fatass and a lot of your health problems will disappear, from heart disease to maternal mortality. I guess reporting on the obvious isn't all that interesting for the media.