Oh, that encrypted super secure Signal app? Yeah maybe not so secure after all. 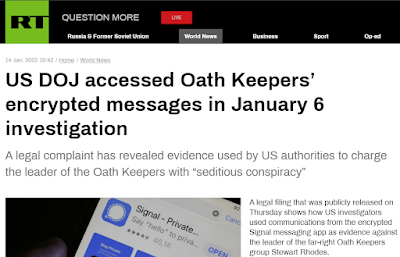 The revelation raises questions about how investigators accessed communications from a service that supposedly encrypts a message, preventing anyone but the person who sent it and the recipient from viewing it.
The legal filing did not specify how investigators had accessed the encrypted messages prior to the arrest of Stewart Rhodes and other Oath Keepers members.
I am not an expert at how the internet works but I do know this much. Everything is running through a bunch of choke points and all of it is creating some sort of electronic footprint. Maybe the Feds aren't looking at everything everybody sends but if they want to see something? I am guessing they can see whatever the hell they want and can create bogus records if they don't find what they needed.
Bottom line, don't send anything via the internet or some sort of phone based app that you think might look bad if a Fed was reading it. Likewise treat anything sketchy being sent to you via the internet from someone you don't actually know in the real world as suspicious and definitely don't get lured into saying something naughty. They are desperate for "right-wing domestic terrorists" so anything you send on the webz is probably fair game, even if you are using a VPN, the Tor browser, etc.
The only place you say sensitive stuff is in the real world and they only people you say sensitive stuff to are real people you know and have done your due diligence with.
Wars are won and lost by one side reading what the other side is saying. Don't be dumb on the internet kids.
Posted by Arthur Sido at 12:26 PM