What Do We Know That Is Truly True?

Ron, your first mistake was considering liberals as friends.....
One of the most startling and uncomfortable discoveries that have accompanied middle age is that rather than being more wise and settled in my knowledge, I am instead discovering more and more that a great deal of what I have known all of my life to be true is in fact not true or at least I don't have the full story.  It is also becoming quite apparent that all of this is intentional. It isn't just sloppy reporting done by low IQ media types, it is willful misrepresentation.
The "Kamloops Indian school mass graves in Canada" story is a great example. If you prefer to read, here is an in-depth look: In Kamloops, Not One Body Has Been Found
If you prefer to watch, here is a great video that references the same information:
The basic gist is as follows: some bimbo "academic" declared that there *could be* graves of *up to* 215 Injun kids at this school from last century. Or the could more likely be tree roots. No one seems to know and not one single body has actually been discovered. That hasn't stopped the government of Canada from rending their garments and donning sackcloth and ashes and of course it hasn't stopped the Injuns in Canada from demanding money. The grift never stops and it is likely no one will ever investigate to see if this is true, nor will any retractions be made. Nevertheless, most people who are aware of this story will assume it was true because the government acted like it was true and because it fits with what the *know*, namely that White people were mean to innocent Indians.
Fortunately many people had their bullshit monitor going off from the get-go on this story. Anytime a story seems too perfectly suited to the narrative it is almost certain that it is bullshit (see: Smollett, Jussie). Unfortunately too many people don't have a functioning bullshit monitor and they just believe whatever they are told.
There are plenty of other examples of "facts" that *everyone knows* are true that are in fact not true and often the opposite of the truth. A personal favorite example is that it is common knowledge that mass shooters are most often White men. Of course that is also not true, not even close, as you know if you read here very often. The vast majority of mass shootings are committed by black men and White men at best come in a very distant second despite Whites being the majority in America. Based on what I was seeing last year it is quite likely that mestizos have supplanted Whites in second place on the mass shooting hierarchy.
Or everyone knows that the buildings that collapsed on September 11th were caused by plane hitting them but few people wonder why a 47 floor building known as "7 World Trade Center" collapsed not from being struck by planes but as a result of debris hitting it and causing a number of fires. For some reason a massive structure between two other buildings collapsed in on itself thanks to some fires, not fires caused by burning jet fuel which allegedly was sufficient to collapse the two towers, but regular fires caused by debris while all of the other buildings surround the WTC were damaged but didn't collapse. 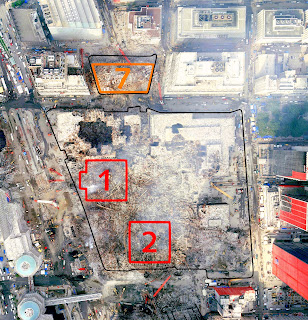 Not to go too far down the rabbit hole but according to reports in the BBC, 7 WTC remains "the first and only steel skyscraper in the world to collapse because of fire.". Weird huh? But we all know that it just collapsed because of the planes that hit two different buildings.
There are plenty of contemporary examples but as you go farther back into history, when records become sparse and we lack things like video evidence, it becomes apparent that there are just a lot of *indisputable historical facts* that are anything but indisputable or facts at all.
Oddly, there are an awful lot of things that fall into this category that you are not allowed to question at all.
Whether it is something now or something in the past, when you are not allowed to so much as ask a question about it, that should set off warning bells. It is a reliable saying that something that is true does not fear examination. In fact it is only by critical examination that anything can be considered true in any sense.
Ask yourself what you really know for sure is true. Then ask what you aren't allowed to question. See where the lines cross.
Question everything. Test everything. Especially what you aren't supposed to test and question. You might just find, as I am finding, that there is a lot that is not what you have been told.
Posted by Arthur Sido at 6:29 PM