The Not-So-Hidden Costs Of Diversity

For something that is Our Greatest Strength, diversity is awfully expensive.
Yesterday brought a bunch of stories all at once about trains being looted, right in broad daylight.
I first saw it at Bayou Renaissance Man: So much for the security of rail freight... and the comment thread was pretty decent.
Peter linked to a thread with videos of the utter devastation left behind be these "people". Here is a sample..... 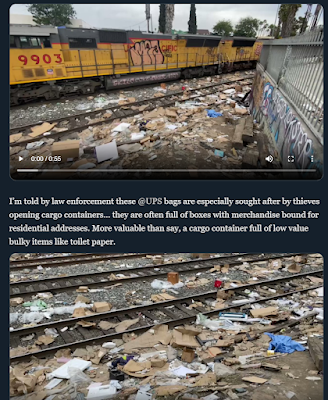 Even Not The Bee mentioned it: WOW! Reporter Keeps Hearing About Train Robberies In LA And Goes To Check It Out, Finds THOUSANDS Of Boxes Scattered Around The Tracks
There are lots of videos from mainstream news sources like this one....
Mrgunsngear posted a video purporting to be from Chicago....
Everyone looting that train has something in common, can you guess what it is?
On the other hand, there are several high volume rail lines near us and they park those trains full of containers for hours on end. You never see anyone looting these cars and you don't see empty packages strewn along the tracks. Why not?
One word: demographics.
See, we don't generally even think about looting train cars or taking stuff because it isn't our stuff to take. That is a novel concept for some demographic groups but it is just second nature for us. That helps explain why we can build and maintain a free and civil society for centuries while others can't maintain what we built for more than a few years.
When this stuff gets stolen from railcars, what happens? I assume that the basic gist is that Amazon or whoever shipped the package files a claim and the railroads eat the cost. In other words it is a cost of doing business. But that money doesn't just magically appear. No, it is part of the total cost of shipping so CSX and Union Pacific and whoever else build the cost of package losses into their total shipping prices. Those prices get passed on to Amazon or REI and they in turn add those costs back to the consumer.
Oh, you thought that you really got "free shipping"? No you don't, you just pay for the shipping in the cost of the item instead of as a separate line item on your invoice. Nothing is "free", you pay for it one way or the other. In the same way the losses incurred when trains are looted in diverse neighborhoods gets passed right on to you via the prices you pay.
The looting of train containers is just one small example of the enormous burden that "diversity" places on our society. It isn't something we see directly but it is there. The huge cost of inner city schools, the various social welfare programs, the innumerable gun shot victims in city hospitals, the prisons bursting at the seams with black and brown inmates. Those are just the obvious costs, there are plenty more in nearly every aspect of our lives, all subsidizing diversity and our obsession with dysgenic breeding and the costs of a society getting dumber by the day.
Far from "our greatest strength", forced diversity is the anchor that is holding us back and soon will bring our entire civilization to a grinding halt.
Posted by Arthur Sido at 10:49 AM