The Next War Is Gonna Be Great!

The Air Force kind of gets a bum rap for being a little....softer....than the Army or Marines. Their unis are hideous and not a ton of them are involved in direct combat. But even the Air Force has their own special ops group. As is the case with most of the special forces types, it is a sausage fest as generally speaking only men have the requisite physicality to survive the training. That makes the woketards upset so it is a priority to force women into these roles even when they can't hack the training. The Air Force got in on the plan to vagina-fy their special ops but got caught cheating: If a dude quits even one time? He is gone, I presume this is true for all of the various special ops teams. I doubt a guy who quits during Navy SEAL training gets to try again. But multiple times?
Mosby had quit the grueling training multiple times, according to the letter posted on social media, only to be reinstated by the leadership of the Air Force Special Operations Command (AFSOC) and the 24th Special Operations Wing.
She quit twice in water confidence sessions and once during land navigation training, the letter claims, and soon, she 'became known for quitting and getting preferential treatment.'
"Water confidence" is a nice way of saying "Swimming the length of a pool with your hands and feet bound". It looks like this. 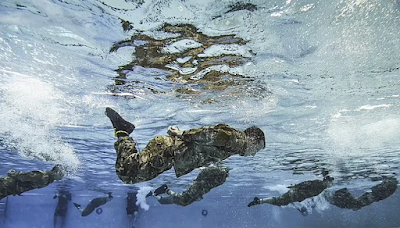 No. Fuck no.
Even Zioclops Dan Crenshaw had a fit....
The letter has since drawn the attention of Rep. Dan Crenshaw, a former Navy SEAL, who wrote on Twitter: 'We cannot sacrifice training standards. Ever. Full stop.'
'If this account is true, our military needs to address it now.'
This is Ms. Mosby

Not just a woman but a black woman. You know the upper echelon was salivating at having her pass the special ops training. Based on her profile from her time at the Air Force Academy she was a hell of an athlete, breaking a bunch of records in track for distance running. So she was likely the best the Air Force could come up with and even still she couldn't hack it. Neither could I even when I was her age and in shape, mainly because I can't really swim even without my hands and feet tied together, but no one would have given me three extra chances to complete the training.
I am sure there are still a ton of super lethal soldiers in the armed forces, guys who can kill you dozens of different ways and are masters of warfare. The issue to me is that it seems that the more we water down the ranks with people who are selected for the most kinetic roles because they make the demographics look "better", the harder it will be for the actual tip-of-the-spear types to cover for them in a real war. You sure don't want Captain Mosby to quit on you when you are in the field with no support and so yeah, I imagine the rest of the candidates for AF special forces were absolutely pissed that some of their better qualified buddies didn't make it but this chick was being pushed through.
On the other hand, anything that makes the military weaker will help us when they inevitably try to turn them on the civilians.
As bad as it is right now, just imagine how it will be in five years. Why would any self-respecting White guy want to join the armed forces today?
Posted by Arthur Sido at 6:00 AM