The political class is a all a-twitter over news that decrepit old liberal Stephen Breyer, Associate Justice on the Supreme Court, is retiring. This will give the current "President" his opportunity to replace the reliably liberal and wrong on every issue (but I repeat myself) old Jewish guy with a more diverse and therefore much more betterer justice. Biden promised to appoint a black wahman to the Supreme Court, so it is likely that the choice will be some flavor of African and if she is a degenerate of some sort, even better.
But it is not just a chance for a black wahman to be appointed to the SCOTUS but also maybe a way to solve a thorny problem for Democrats. Rumors are swirling about short lists of possible contenders but one name keeps popping up: 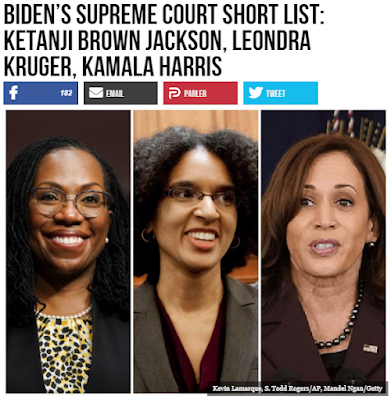 The Whore Of Babylon herself, Kamala "Ankles Up!" Harris, the half black, half Indian woman who has set a new standard for being unpopular. Not only is Harris a literal political whore she is also dumb as a box of rocks....
Pollak: Kamala Harris Could Become First Supreme Court Justice to Have Failed Bar Exam
According to the article, she doesn't think it is a big deal:
Harris says she recently consoled a young law graduate who also didn’t pass; ‘I told her, it’s not a measure of your capacity.
Sorry Kamala but that is exactly what it is. The bar exam is a final barrier to ensure that people who graduate from law school actually learned what a lawyer should know. The same thing exists for all professional occupations, the CPA exam and medical boards for example, all designed as safeguards against incompetence. We already know that lots of people are accepted into professional schools and lots of people are pushed through colleges so these exams are a final way to weed out the affirmative action types before they enter the workforce.
As many people have noted, Kamala is a huge problem for the Left. She is incredibly dumb and also unpopular but she also won't leave on her own so they can push out Biden. This would be a way to get her permanently out of the way and allow them to put Biden's replacement into the VP slot, let that person stick around for a little bit and then shove Grandpa Child Sniffer down a flight of stairs. There is already rumor that the South Bend Sodomite Pete Bootygag is the favorite to replace Harris.
Of course all of this could be a distraction and the real pick might be some super radical black Marxist chick. It won't change the balance on the court but it will shift the left-wing of the court even further left. I expect the announcement will happen quickly and then the real circus begins as Republicans gets some revenge for the Kavanaugh hearings.
Posted by Arthur Sido at 7:28 AM