The year end numbers are in for Chicago and it is grim....from Hey Jackass! 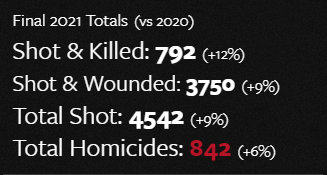 Over 840 people murdered in Chitown for the year, a 6% increase from the slaughter last year alongside a 9% increase in the total number of people shot. The vast majority of those murdered, over 81%, were black and an additional 14% were mestizo. 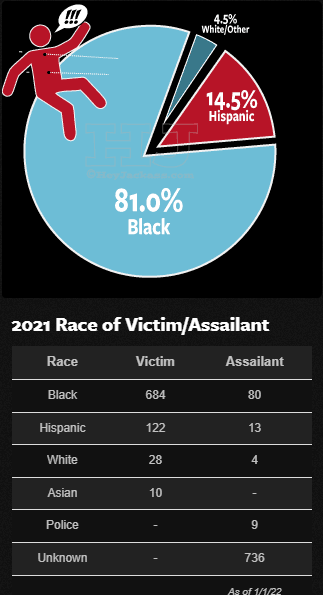 ...and yet blacks make up the vast majority of murder victims and at least as high a percentage of the murderers, while Whites who make up 1/3 of Chicago residents are only around 3.3% of murder victims.
This is the case across the country.
Toledo, Ohio racked up 71 murders in 2021...."When is enough, enough?" 2021 marred by gun violence, homicides
Mr. Price was one of 71 people whose deaths were ruled a homicide in Toledo this year, a record number after the city set a previous record of 61 homicides in 2020.
That is a huge number for Toledo, a smallish Midwestern city that has been hollowed out over my lifetime as Whites moved out of the city to the suburbs, leaving behind the black underclass who have been gradually becoming more openly violent with each passing year.
Meanwhile in the state capital of Indiana, Indianapolis, the slaughter has been incredible...
2 killed, 1 injured in shooting during 'family disturbance' at north side apartments
...The killings brought Indianapolis to 271 homicides for the year with just one more day left in 2021.
And the shooting was just the latest in a week that has seen eight people die from gun violence since Sunday.
I don't think there was anyone murdered yesterday but Indy was already way past their previous murder records.
Philadelphia has been on a torrid pace for murders all through 2021 and the City of Brotherly Love shows no sign of slowing down in 2021. 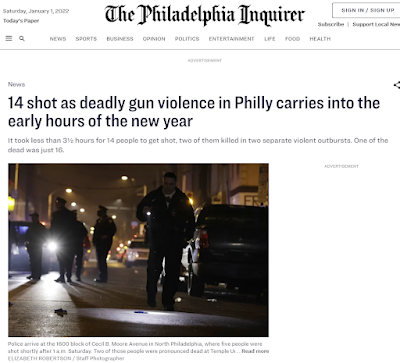 14 shot as deadly gun violence in Philly carries into the early hours of the new year
On the streets of Philadelphia, 2022 began where 2021 left off. It took less than 3½ hours for 14 people to be shot, two of them killed in separate violent outbursts. One of the dead was only 16 years old....
....The gun violence followed a year during which Philadelphia hit an all-time high for homicides. In 2021, at least 560 people were slain, a bigger tally than in more heavily populated cities including New York and Los Angeles.
The list goes on and on and on...
It is also the news story that should dominate the headlines but will quickly fade from memory. Odd that black lives don't seem to matter when Orange Man Bad isn't President....
Posted by Arthur Sido at 7:01 PM