That Is What I Am Talking About

Most of the new products churned out by firearm manufacturers seem to be minor variations of something that already exists. The entire Glock line-up is just the exact same pistol, some bigger and some smaller, in different calibers built around the same hideous and utilitarian design.
The market is saturated with double-stack mag micro-compacts. The Sig Sauer P365, the Springfield Hellcat, etc. All of them are basically the same thing: polymer, striker-fired pistols that hold 10-13 rounds. That is all fine and dandy, the existing micro-compacts do what they are supposed to, being super concealable while still providing double digit round counts. Because they are so popular, everyone makes one. Even Kimber got in on the game with their Mako which looks pretty much just like a Hellcat but is overpriced like everything else Kimber sells.
But yesterday I saw something kinda new and I sort of am thinking about once more ignoring my own admonition and getting one.
The firearm in question comes from Smith & Wesson. I really do not like any of the smaller S&W Shield models. Not a fan and don't own one although they are extremely popular. The full size SD9 is actually a decent pistol and is price right at $400 MSRP but it isn't a concealed carry gun. However the new offering, called the CSX (not the railroad), is quite a bit different from the majority of micro-compacts. 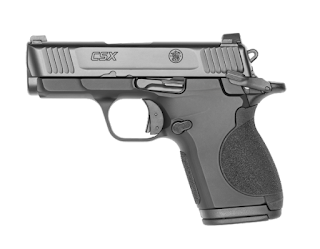 The two things that caught my attention were the aluminum alloy frame, in contrast to most being polymer, and the hammer versus the normal striker fired action. Like many micro-compacts it comes with a flush 10 round mag and an extended 12 round magazine. The grip is a little weird being just smooth metal except on the backstrap and under the trigger on the front but I usually put Talon grips on my pistols anyway. I prefer the heft of a metal alloy frame, and that will help with the recoil which can be unpleasant on these tiny pistols and it might just be my age but I still prefer having an external hammer. In a rush you can always double action the trigger but if you have a moment, thumbing back the hammer gives you a much lighter trigger pull on that first shot. It has a thumb safety which a lot of super awesome tactical operators don't like because it interferes with their lightning fast draw or something but if you don't want to use it, don't. Seems simple enough.
Anyway, I don't get anything from S&W to mention this, no free pistol to try out or any compensation, just thought it deserved mention for at a minimum thinking a bit outside of the box and offering something different in what is otherwise a cookie-cutter saturated market. If I ever get my hands on one I will give a full report.
Posted by Arthur Sido at 10:23 AM