American Partisan published a Pravda video last night that was worth watching....
The video is long on propaganda and short on details but on the other hand, Big Country Expat also saw the video and shared this graphic: 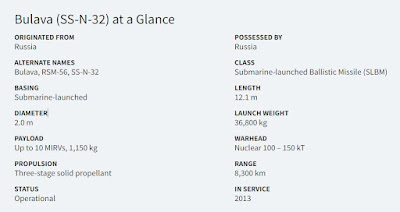 Note the range on that bad boy: 8,300 kilometers. That means they don't have to be sitting in Boston Harbor to hit most of the interior of the country. I used a fun little tool BCE directed us to and came up with this....

Looks to me like one of these Bulava's could theoretically hit Chicago if launched from the Mediterranean. New York and London are only 5500 kilometers apart so from pretty much anywhere in the middle of the Atlantic these missiles could hit most of the U.S. They don't need to be right on the coast.
Meanwhile the USS Harry S. Truman carrier group is steaming for the Mediterranean.
U.S Aircraft Carrier Strike Group Heads for Mediterranean amid Russia Threats
(Pentagon press secretary John) Kirby insisted the war games had been “long-planned,” since 2020, and were not in response to the recent Russian military aggression near the Ukrainian border, though the drills are not listed on NATO’s website among exercises slated for this year.
The announcement came a day after Russia announced its own all-out naval exercises, with more than 140 warships and about 10,000 soldiers taking part in January and February in maneuvers that will take place in the Atlantic, the Arctic, the Pacific and the Mediterranean.
Cuz what you should do when tensions are high between nuclear armed powers is to keep finding ways to provoke each other.
It might be smart to make sure your vehicles are full to the top with gas because if the shooting starts gas prices are going to skyrocket and availability will plummet but if the very worst happens and nukes start flying? Having your head on a swivel might only be useful for reaching your ass to kiss it good-bye.
Posted by Arthur Sido at 9:14 AM