Carl Sagan was kind of a weirdo and pretty pompous but he was also a very smart guy. I watched his series Cosmos when I was a kid in the early 1980s, and Cosmos is still the most watched TV series of all time. I am going to download and watch it again just for nostalgia and kicks, and see if it stands the test of time for someone 40 years older and (maybe) a lot wiser and more skeptical. Sagan was one of the first to really "popularize" big scientific concepts for people and I credit him with being one of the inspirations for my older brother to pursue astrophysics. Cosmos came out in a heady time when space exploration was still a thing and movies like Close Encounters of the Third Kind and E.T. were wildly popular and Sagan provided a realistic but entertaining counterweight to the science fiction in pop culture.
A few weeks ago, many decades after Cosmos, I downloaded a copy of Sagan's book with the odd title of The Demon-Haunted World: Science as a Candle in the Dark, published in 1996, the year Sagan died. In it Sagan is making his case for science and reason to serve as a counter-weight to what he sees as "pseudoscience" which includes everything from Tarot cards to basically all forms of religion. I am not far into it but I ran across something he wrote that seems worth sharing and pondering.
I am sure others have shared this but I read it the other day and thought it was profound for our times. Check this out.
Science thrives on errors, cutting them away one by one. False conclusions are drawn all the time, but they are drawn tentatively. Hypotheses are framed so they are capable of being disproved. A succession of alternative hypotheses is confronted by experiment and observa­tion. Science gropes and staggers toward improved understand­ing. Proprietary feelings are of course offended when a scientific hypothesis is disproved, but such disproofs are recognized as central to the scientific enterprise.
Pseudoscience is just the opposite. Hypotheses are often framed precisely so they are invulnerable to any experiment that offers a prospect of disproof, so even in principle they cannot be invalidated. Practitioners are defensive and wary. Sceptical scrutiny is opposed. When the pseudoscientific hypothesis fails to catch fire with scien­tists, conspiracies to suppress it are deduced.
Carl Sagan. The demon-haunted world: science as a candle in the dark (Kindle Locations 407-414)
Practitioners are defensive and wary. Sceptical scrutiny is opposed. That seems oddly familiar somehow...
Sagan was talking about stuff like alien abduction but he could have been writing about the current Cult Of The Covidian. It is absolutely forbidden to ask any questions about Covid other than "how else can I demonstrate my complete compliance?" to whatever Fauci utters. It is even more extreme than the prior example of "climate change" and on par with the "science" that declares a hairy dude with a pecker becomes a real woman if he simple declares it so. Sagan had something interesting to say about that as well.
At the heart of some pseudoscience (and some religion also, New Age and Old) is the idea that wishing makes it so.
Carl Sagan. The demon-haunted world: science as a candle in the dark (Kindle Locations 304-305).
A man wishing he was instead a women or vice versa doesn't make it so, any more so than a kid wishing he was Superman can suddenly leap tall buildings in a single bound.
Back to the main quote. Science, real science, is based on evidence and expects pushback, and real scientists anticipate being wrong. That is how science works. You don't decide on an outcome and then discount anything that questions that outcome. In theology this is called eisegesis, determining what you want a Scriptural passage to say and then contorting your definition to suit. It is very common among "progressive" Christians as a way to do away with the harsh statements of the Bible and reduce Christianity to a soft, fuzzy religion led by a proto-hippie named Jesus.
Something I have said before with a slight twist. It once was the case that people were recognized as artists because what they produced was art. In other words, it had artistic value. Now stuff is considered art if the person producing it declares themselves an artist. Even if it is complete trash with no artistic value, it is still art because the person slapping paint on the canvas has decreed that they are an artist. It is an important distinction.
The same is now true for science.
To be considered science, an assertion no longer needs to face skepticism and scrutiny. It simply must be declared to be True Science™ by someone with a degree and preferably a lab coat.
If someone who is a "scientist" says it, therefore it must be "science" and therefore must be true. As The Truth it may not be questioned or doubted in any way, otherwise you are "anti-science". That attitude, so prevalent today, is the very opposite of actual science. 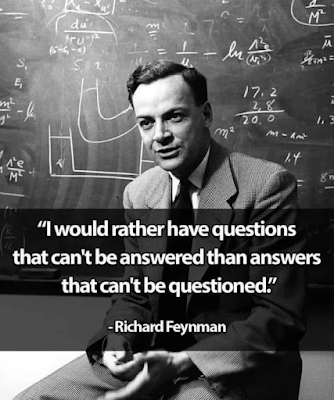 Science is a not The Truth™. It is a tool that allows us to make sense of the world around us in the pursuit of the greater Truth. Like all tools, it can be misused. From Sagan in the book version of Cosmos.... 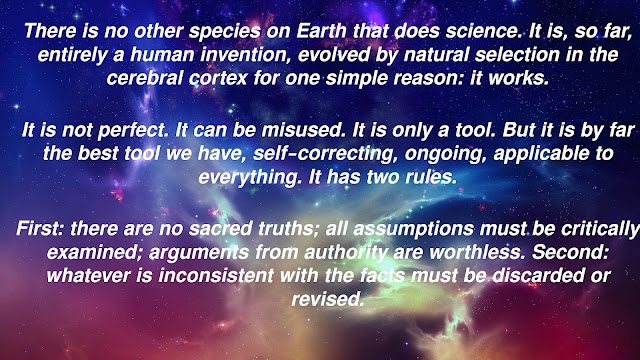 I wonder what Sagan would say in this environment if he were still around? Sadly I assume he would be one of the "Trust The Science" types, for political reasons rather than for valid scientific ones.
From global warming/climate change to the "transgender" madness to the Cult of Covid-19, we are told we must "Trust The Science" at the same time we are told that the most critical check and balance of real science, skepticism, is not permitted. What remains bears little resemblance to the real work of science throughout history and is more akin to the worst excesses of the Dark Ages.
Let's make a deal. I will start to "Trust The Science" again once "scientists" start to employ actual scientific methodology in making their claims. That seems fair.
Posted by Arthur Sido at 6:30 PM