It is January and in the firearms biz that means one thing: SHOT Show!
The show was cancelled last year because of the 'vid and this year they are making people wear masks despite masks being demonstrably useless. It caused a lot of ruckus, as you might imagine most people in the firearms business, especially the local gun store types, are of a particular political persuasion that tends to not like being told what to do by government busy-bodies.
SHOT Show is an industry-only event and it is where you typically see the gun and accessory companies introducing their newest stuff. Most of it is a rehash of existing firearms but some of it is new. Back in 2020 at the last SHOT Show Palmetto State Armory owned the show with a huge list of new stuff but some of it like the JAKL and the MP5 clone has still not hit the market. This year they are promising a new 5.7mm pistol "in around 60 days". We will wait and see but it would be cool since most of the offerings in that caliber are stupid expensive. 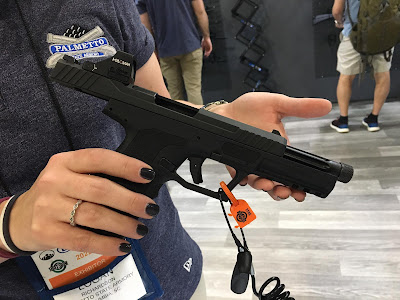 Lots of guntuber types are doing videos from SHOT Show in-between trying to avoid alcohol poisoning so there should be some good recaps of the niftiest stuff coming out. I'll share some videos as I deem appropriate of the coolest new tacticool gear. Wish we could justify going but our little business just isn't enough for me to spend that kind of money to go to Vegas.
For our part business seems to be picking up and stuff is moving a little more. Availability is still great but prices seem to be creeping up on some categories. Just here and there but as an example bolt action rifles seem to be getting more expensive across the board.
Ammo pricing still sucks. No signs of that changing any time soon.
Still lots of opportunities to stash stuff away in your safe and upgrade what ya got already. With 2021 coming and going with zero significant gun control legislation, we are in a good place but that is one false flag shooting away from changing overnight.
Posted by Arthur Sido at 4:16 PM