Pandemic Of The Indebted

Speaking of pandemics and awesome news, I saw this last week and thought it worth passing along...
Shocking Consumer Credit Numbers: US Credit Card Debt Soars Most On Record With Savings Long Gone
While it is traditionally viewed as a B-grade indicator, the November consumer credit report from the Federal Reserve was an absolute stunner and confirmed what we have been saying for month: any excess savings accumulated by the US middle class are long gone, and in their place Americans have unleashed a credit-card fueled spending spree.
Here are the shocking numbers: in November, consumer credit exploded by a whopping $40 billion, double the expected $20 billion print, more than double the $16 billion October number, and the highest on record!
... the real stunner was revolving, or credit card debt, which more than tripled in November, soaring to $19.8 billion from $6.6 billion in October, by far the highest such print on record.
RTWT. This is the critical chart..... 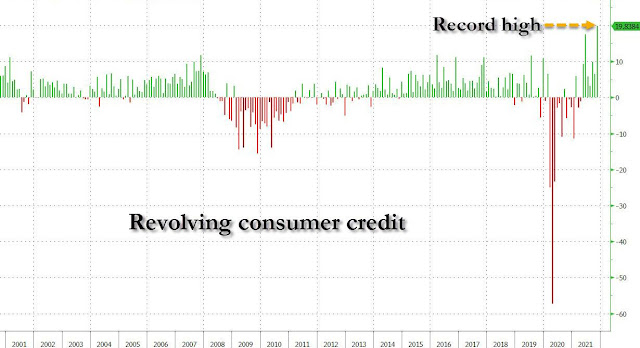 "revolving debt" is a fancy term meaning lines of credit, most commonly credit cards and to a lesser extent things like home equity lines of credit, or HELOCs in the banking biz. This is in contrast to traditional loans like car loans and mortgages that generally are a fixed amount borrowed and paid down over time, while with revolving debt the principal balance is always fluctuating.
The economy is on life support and the only thing keeping it going is consumer spending driven by unsecured credit card debt, plus government spending using "money" whipped up out of thin air.
This explains why even though apparently no one is working and inflation is at a 40 year high, people seem to keep buying stuff. There are almost as many Amazon, UPS and FedEx trucks running the roads now as there were right before Christmas so people haven't stopped spending.
The usual problem with revolving debt is that people keep adding to it and not paying it down. A lot of people are going to be surprised when they file their taxes and realize they got a bunch of their fully refundable child tax credit in installment payments last year as they are probably relying on their "tax return" to pay off their credit cards.
Lots of Americans have racked up lots of unsecured debt and the more they pile up, the larger the minimum payments they owe each month. The end result of this is predictable, more people defaulting on credit card debt and more personal bankruptcies.
Unsecured debt fueled consumer spending is one of the key components of the house of cards that we call the American economy. All of those stores, online retailers and restaurants that keep popping up are relying on an endless and, this is important, ever-increasing firehose of credit card debt to keep selling their crappy wares. One reason Big Business loves unlimited mass immigration is cheap labor but the flipside is that the same cheap laborers are also new consumers of crap made overseas.
Much of our economic system in 2022 is based on consumers buying goods made somewhere else with "money" that doesn't exist. It is a perfect storm of fragility and it won't take much of a shock to make it come apart.
Posted by Arthur Sido at 1:22 PM