It is the sign of a middling reporter but an excellent liar to come right out and tell a falsehood without your target audience realizing you are telling a falsehood. Take for example the headline from this story in The Atlantic....

Now look at the highlighted word:

"seems to have". Now "seems" is a nice way saying "maybe" or "might have" and it is appropriate because the entire essay is one giant exercise in presenting vague and unrelated information that is supposed to point to the conclusion that Jeff Asher and Rob Arthur have already decided on and declared right in the headline: moar gunz equalz moar murderz.
It is absolutely true that gun sales have been enormous over the last two years. Believe me, I just was doing preliminary sales reports from last year and even with a bunch of very quiet months in the summer and fall we sold a ton of guns as a little home-based outfit.
Likewise it is also true that 2021 saw a huge increase in murders.
Both of those are factually correct and easily verified. What does not follow is that there is a causal relationship between the two apart from other factors.
For example, I can say that the field behind my house was planted in corn last year. Also China is a nation in Asia. Both of those statements are true but there really isn't a direct relationship between those two facts and certainly not a causal relationship.
According to the Feds there were a few background checks performed last year and in 2020. Just a small handful.... Over 78.5 million background checks in just two years. That is almost 20% of all of the background checks performed through NICS, the FBI "instant" background check system, since November of 1998. There is not a one-to-one relationship with NICS to sales. Occasionally background checks are denied, around 100,000 per year, which is a tiny fraction of all background checks.  On the other hand some states don't require a Federal NICS check because they have their own system and other states don't require a NICS check for holders of concealed carry permits (since you already passed a background check). Also people often purchase more than one firearm per transaction, you can record three firearms on a 4473 as it is plus there is an additional firearms form for as many more as you sell. If anything the NICS numbers drastically underestimate the number of guns sold in a year. So it is very conservative to declare that at least 80 million new firearms were transferred into private ownership in 2020-2021, over 38 million in last year during a record setting pace for murders.
The job of an actual journalist would be to see where the evidence leads and discover if there was a connection but for these two clowns the conclusion was already decided ahead of time. They are relying on their readers to not examine the information provided too closely, like in this from the opening paragraphs (highlights mine): 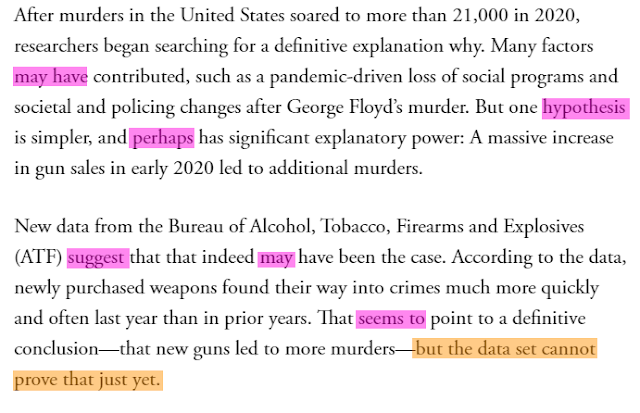 They spend two paragraphs telling you without telling you what they want you to think: moar gunz = moar murderz and then come right out and tell you that the data they have cannot prove what they are asserting!
Their entire case relies on one statistic from the ATF: the time a gun has been in circulation before it was in a trace. The problem with using this? Well let's take a look at their own words:

Let's go back to what the authors said in the beginning of the piece.
"After murders in the United States soared to more than 21,000 in 2020":
So we have 21,000 murders in the U.S. in 2020 and while there aren't official numbers yet for 2021 that I could find, overall the number of murders across the country was about the same from what I can see so let's call it 21,000, a number highly demographically concentrated as we will see.
But the ATF did around 400,000 trace requests in 2021, so murders would be only a small percentage of those trace requests. Do we know how many of those trace requests were because of murders? No. No we do not and they admit this:

In other words, they are just guessing here. Is it an educated guess? Maybe, maybe not, but it is not the sort of precise data that would lead to a definitive statement. There are lots and lots of trace requests done and the vast majority of them are not for firearms involved in murder so that "data" is useless for making their argument.
This is the key take-away:
The data they are using to back-up their claim that record setting gun sales led to more murders simply does not provide that information.
In short, this piece by Jeff Asher and Rob Arthur is, technically speaking, complete bullshit and the worst sort of yellow journalism that is all too common in our modern media.
If we had a functioning media that engaged in the actual hard work of journalism instead of opinion pieces that are pre-determined outcome driven propaganda pieces pretending to be journalism, Mr. Asher and Mr. Arthur might have asked some pertinent questions. Questions such as....
- Who is committing these murders?
Guns aren't just shooting people at random. There are a dozen guns within ten feet of me and none of them have ever shot at me.
We know the answer and that is why they are looking to blame the guns instead. The murder surge happened almost entirely in the non-White communities, especially among blacks and to a lesser extent with mestizos. Most murders happen in a handful of neighborhoods notable for their high percentage of blacks. Conversely the safest places in America like Wyoming, Maine, New Hampshire and Vermont, are notable for being overwhelmingly White.
What is more plausible for an explanation of the increase in murders is a loosening of policing in minority neighborhoods that has emboldened violent black and mestizo criminals who are engaged in a cycle of retaliatory shootings as well as the all too common "fight turns into a mass shooting". Those two factors, targeted shootings of rivals and angrily blazing away into a crowd, have led to the huge increase in mass shootings in America. Far from the "racist White supremacist domestic terrorist using an AR-15", virtually all mass shooters in America are non-White.
According to the Gun Violence Archive, a favorite of the media, the number of mass shootings in 2021, under the Joe Biden regime, went way up over the prior record shattering numbers in 2020...

693 mass shootings in America in 2021, a more than 13% increase over the prior record set in 2020. How much media coverage has this gotten with Joe Biden as "President"? Ask yourself why no one is talking about this. Don't worry, I will keep bringing it up.
As I keep repeating. America doesn't have a gun violence problem. If the problem was the availability of guns we would all be dead after adding nearly 80 million guns into circulation the last two years. No, America has a serious non-White violent crime problem and that problem is spiraling out of control.
Too bad people like Jeff Asher and Rob Arthur won't spend any time talking about the actual issues of gun violence in America and instead focus on legal sales to law abiding citizens.
Posted by Arthur Sido at 3:53 PM