How We Know January 6th Was A Real Attempted Insurrection

There are some people skeptical of the obvious: the events around the Capitol on January 6th, 2021 were clearly an organized, violent, armed attempted insurrection. I have exhaustively compiled a list of unassailable FACTS proving that Orange Man Bad and his supporters for realz tried to overthrow our government and only by the shooting of unarmed Ashli Babbitt by heroic Capitol cop Lieutenant Michael Leroy Byrd was America saved.
Use these FACTS to totally OWN your MAGAtard conservative friends and family.
- No one seemed to know anything about the planned insurrection except the FBI
I run in some pretty extreme circles online and oddly no one I knew was talking about this insurrection. No one was organizing anything or even mentioning it. Would I have gone to what definitely was not a preplanned false flag incident? Certainly not. Still not a word from anyone about it.
- The tens of millions of gun owners didn't show up with any of our hundreds of millions of guns
Looking at the American political landscape, there are probably at least 20 million reasonably able-bodied adult men who voted for Trump. Those 20 million men likely have 200 million guns, give or take, and billions of rounds of ammo. From what I can tell, no one brought guns to this "insurrection" even though they would have to know that the Capitol police and the rest of the Fed law enforcement apparatus would be armed. What was the plan here after stealing some staplers and knickknacks? Wouldn't a planned insurrection have more of a...well, a plan, other than "wandering around"?
- The noticeable lack of heads on spikes adorning the Capitol
Sadly not a single Congresscritter was given the Ned Stark treatment. None were in any danger. Some even got into discussions/arguments with the crowds. There likely wasn't a single person involved who would have actually done any harm to any of the members of Congress, not even....
- AOC remains, sadly for her, unravished by actual men.
In the aftermath of the "riot"/"insurrection", Alexandria Ocasio-Cortez went to the internet to tearfully tell us that she was afraid she was going to die on January 6th and then randomly brought up that she is allegedly a "sexual assault survivor". No idea why she mentioned that except that she was implying that she thought she would be raped by the hairy MAGA men (an assistant to Pelosi named Leah Han came right out and said she hoped thought she was going to be raped: These People Are Insane).
This was followed by her recently being photographed unmasked in Florida and her responding to the howls of laughter by insisting that what was really going on is that Republicans want to date her: 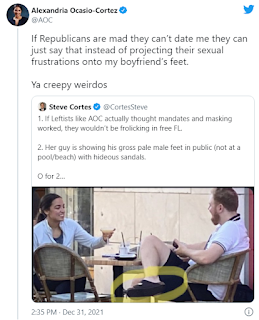 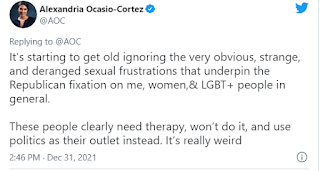 I guess when your entire career has been based on waggling your tits for tips/votes, you think everyone wants to hump you but even the horniest guy wouldn't want to date her as that would involve her talking non-stop during those dates. Sounds more to me like she is pining for an actual man to give her a good rogering as the pasty soyboy boyfriend in the picture above doesn't look up to the task. No thanks, I will take a lot for the team but not that.
- Having seized control of the Capitol building, these dastardly insurrectionists wandered around, engaged in some petty theft and then....left of their own accord. 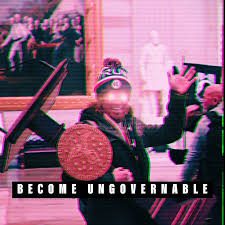 Sadly no one took a dump on Nancy Pelosi's desk. Some stuff got stolen and other stuff got broken and a black cop murdered a White woman but really it was more like unscheduled tourism than a "riot". No one made them leave, they just kind of ran out of steam and wandered out the same way they wandered in.
Now if /ourguys/ were really planning an insurrection, there would have been some actual planning. Some guys with guns. Scratch that, lots of guys, lots of guns. Body armor, ammo, supplies, comms. Many of /ourguys/ are ex or current military/LEO, do you think that maybe there would have been some planning perhaps?
At worst, for /ourside/, January 6th was a political rally that spoke to serious anger and frustration over a deeply sketchy "election" that got out of hand, resulting in some mild property damage, some injuries and one woman murdered by a cop.
On the other hand, the far more plausible scenario to the reasonably informed observer is that January 6th was a staged false flag operation involving a bunch of Federal informants and agents who egged people on and encouraged them to commit minor trespassing and mild larceny. The complete plan is not entirely clear but at a minimum the intent was to incite people to act out on their understandable outrage in order to paint Trump supporters as dangerous and create a pretext for more surveillance and new laws restricting free speech, expression and assembly.
If you are more upset by some people entering the Capitol building without permission than you are at the idea of the Feds trying to entrap people into committing criminal acts in order to arrest them and clamp down on our liberties, you probably are someone who shouldn't be allowed to reproduce or vote. More broadly, I would say the same applies to you if you think that January 6th represented a real crisis rather than just a minor kerfuffle.
That of course won't stop endless hand-wringing from the media all day today. Just remember the golden rule of watching the news: Don't, because they are lying to you.
Posted by Arthur Sido at 5:00 AM