Hate Is One Of The Highest Virtues

From our earliest recollections, most of us were taught not to hate. Not anyone, not anything. Saying "I hate broccoli" was met with a stern admonition to not say you hate anything. Hate was always bad.
The civic religion of America is based on *some* of the teachings of Jesus Christ, selected sayings attributed to Christ that elevate love as the highest virtue, even to the point of loving those that hate you:
But I say to you who hear, Love your enemies, do good to those who hate you, bless those who curse you, pray for those who abuse you. To one who strikes you on the cheek, offer the other also, and from one who takes away your cloak do not withhold your tunic either. (Luke 6:27-29)
This has been gradually interpreted to mean a milquetoast religion where you should love people that hate you and if someone strikes you, don't retaliate and rather offer the other cheek to get hit again. Whether you agree with that interpretation or not is irrelevant because that is generally what most people think Jesus meant as a normative practice for Christians.
As our society has slowly rotted away, we entered the era of the "hate crime" which declares that some crimes are worse than other crimes, worse to the point of becoming a Federal issue, based on whether they were motivated by "hate". The political prisoners now sentenced to life in prison for defending their neighborhood from a jogging thief are going to be subjected to yet another show trial on Federal "hate crimes" charges, charges that seem to only ever be applied in the case of a White defendant in an incident involving a non-White. "Hate crimes" are a way for the authorities to avoid subjecting defendants to double-jeopardy by trying them for the same crime twice but calling the second set of charges something different. Even the mention of a "hate crime" makes the average Normiecon break out in a cold sweat despite virtually all reported "hate crimes" later turning out to be hoaxes.
When it comes to hate, as with most things, there are two sets of rules. One set for White people who are the only group where hate is considered to always be a bad thing, unless it is hate for their own people, and then everyone else who is mostly allowed to hate as long as the object of their hate is White people and anything and everything we have built.
Here is the point. Hate is not an unqualified evil as an expression of human emotion. Quite the contrary, hatred directed in the proper avenues is one of the very best expressions of our humanity. If you can read about someone who raped and murdered a child and not hate them, I would question your very humanity. If someone hates you and wishes you, your family or your people harm, the only rational response is hatred in return.
If you hate me and mine, I will gladly hate you right back. Should wish to visit harm upon me or mine, expect to be hurt in kind. Love is something to be reserved for those worthy of being loved. I love my wife and my children, my family and my people. Some random person I have never met and have no interest in meeting? Why would I love them? That goes even more so for those who dislike or hate me. I have no room to love my enemies, not in meatspace or even as a concept.
The sort of indiscriminate "love" that is usually assumed by popular culture? My guy George had something to say about that..... 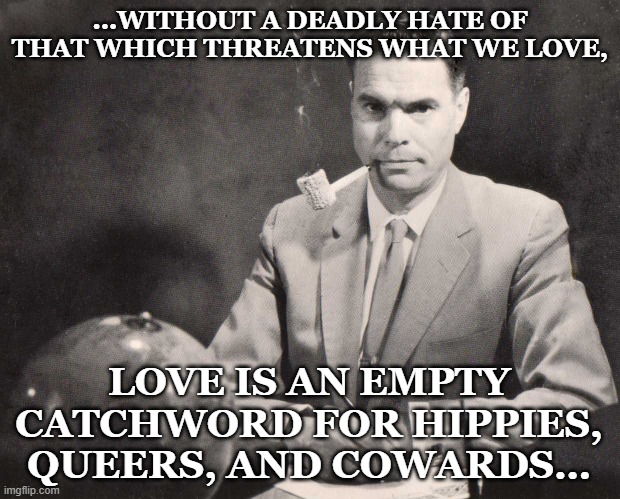 Preach! Say what you will about Rockwell, we could use more plain speaking men today. Too many of those who claim to be leaders are weak, mealy-mouthed worms.
Love and hate are the antithesis of one another and you cannot have one without the other. If you claim to only love, how can you distinguish between love that is real and "love" that is just a virtue signaling statement? Just as you cannot comprehend true beauty without ugliness, accomplishment without failure and joy without sorry, you cannot truly love unless you know how and what to hate.
I don't go around seeking out people to hate. Why would I need to when those who hate me and my people are so common and vocal? There are ample examples of those who desire death for me and extinction for my people. To paraphrase John Quincy Adam, I do not go abroad in search of monsters to hate. The monsters have come right to us.
Some might say people like me have brought this hatred upon ourselves. How exactly did we do this? By wishing to be left alone, to live in a civilization that offers endless opportunities to everyone who seeks after them and provides freedom and justice in measures unknown throughout human history? I would be content to live out my life in quiet isolation with my family in our little corner of Indiana, being bothered by no one and bothering no one in return. But they couldn't leave us alone. They couldn't just let us be. They had to keep pushing and poking and stirring up, mostly because they are losers who are discontent with life and can't stand to see anyone else contented. They have brought us to the brink of civil war and they will reap the harvest of the bitter seeds they have planted.
If you wish to show your capacity for love, you must likewise show your capacity to hate. You cannot have one without the other. Show me a man who says he hates nothing and I will show you an empty shell that doesn't understand true love.
Hatred for that which ought to be hated is a powerful tool and a righteous one.
Posted by Arthur Sido at 11:42 AM