From The "They Hate You And Want You Dead" Files

In all likelihood you have already seen this but sharing here for posterity. Writing in the L.A. Times, one Michael Hiltzik (and I'll save you the trouble, yes he is):
Column: Mocking anti-vaxxers’ COVID deaths is ghoulish, yes — but may be necessary
On the one hand, a hallmark of civilized thought is the sense that every life is precious.
On the other, those who have deliberately flouted sober medical advice by refusing a vaccine known to reduce the risk of serious disease from the virus, including the risk to others, and end up in the hospital or the grave can be viewed as receiving their just deserts....
....It may be not a little ghoulish to celebrate or exult in the deaths of vaccine opponents. And it may be proper to express sympathy and solicitude to those they leave behind.
But mockery is not necessarily the wrong reaction to those who publicly mocked anti-COVID measures and encouraged others to follow suit, before they perished of the disease the dangers of which they belittled.
That is pretty rich coming from an obvious paragon of health like this guy... 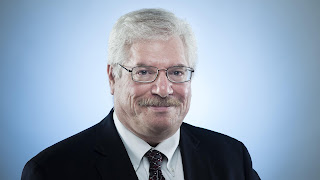 But pointing that out might seem rude, as it generally would be rude and indeed ghoulish to laugh when a fat person dies from coronary disease or a drug addled violent felon with heart problems dies of heart failure while resisting arrest.
Or laughing at blacks who hang out with other blacks and end up getting killed in the crossfire.
Or mocking fags who contract fatal sexually transmitted diseases as a result of plunging other dudes.
Even perhaps derision for a girl who goes to a frat party and has a bit too much to drink and ends up being the Coed Caboose on a train of frat boys.
People make poor decisions all the time and often those decisions have negative consequences. Generally it is considered poor form to make fun of people for that but that was then and this is now. Getting people to take a "vaccine" that doesn't prevent them from contracting or spreading Covid or wearing a mask that doesn't prevent or significantly inhibit the same, is a valid cause for any amount of pressure, mockery and even threats of violence.
Mikey here would find mocking a girl who is sexually assaulted because she got drunk at a party or a black kid shot because he was hanging on a street corner with thugs to be abhorrent and possibly a hate crime but he can mock "vaccine" skeptics, especially in the case of his example of someone who is White and a Republican. The rules are different based on your politics.
They really do hate you and want you dead. Hate them back.
Posted by Arthur Sido at 9:46 AM