Russia preparing false-flag operation as pretext for Ukraine invasion, US warns
The United States is concerned that the Russian government is preparing for an invasion into Ukraine that may result in widespread human rights violations and war crimes, a U.S. official said Friday.
The official told Fox News that Russia is laying the groundwork to have the option of fabricating a pretext for invasion, including through sabotage activities and information operations, by accusing Ukraine of preparing an imminent attack against Russian forces in Eastern Ukraine.
When I saw that, the first thing I thought was:
This sounds like the old double reverse false flag.
Now if the Ukrainians attack the Russian forces, the U.S. can screech "See, we told you a false flag was coming!"
On the other hand, I wouldn't put it past the globalists who are chomping at the bit for a war with Russia to orchestrate an attack to provoke the Russians even more and then in turn be able to blame the Russkies for responding.
As Andrew Anglin pointed out, it is shocking to see them even using the term false flag because calling something a false flag is of course a sign of being a conspiracy theorist and probably a racist, leading to bans on social media.
Along the same line of thinking, the U.S. is also warning Putin that we would fund and support a Ukrainian insurgency, assuming that the Russians would likely roll right over the Ukrainians. Apparently the Ukrainian active duty military is only around 250,000 and the Russians have over 100,000 troops already on their border, with what I presume is dramatically better equipment and training. Ukraine won't last long in a conventional war. 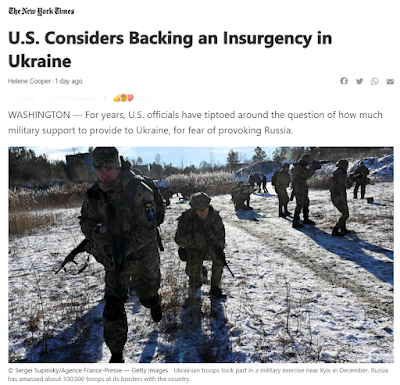 U.S. Considers Backing an Insurgency in Ukraine
...But Biden administration officials have begun signaling to Russia, which has massed about 100,000 troops at its borders with Ukraine, that even if it managed to swiftly capture territory, Mr. Putin would eventually find the costs of an invasion prohibitively expensive in terms of military losses.
“If Putin invades Ukraine with a major military force, U.S. and NATO military assistance — intelligence, cyber, anti-armor and anti-air weapons, offensive naval missiles — would ratchet up significantly,” said James Stavridis, a retired four-star Navy admiral who was the supreme allied commander at NATO. “And if it turned into a Ukrainian insurgency, Putin should realize that after fighting insurgencies ourselves for two decades, we know how to arm, train and energize them.”
He pointed to American support for the mujahedeen in Afghanistan against the Soviet invasion there in the late 1970s and 1980s, before the rise of the Taliban. “The level of military support” for a Ukrainian insurgence, Admiral Stavridis said, “would make our efforts in Afghanistan against the Soviet Union look puny by comparison.”
In other words, just having fled Afghanistan with our tails between our legs, we know a little something about losing to an insurgency. Worth noting, around 17% of the people in the Ukraine are ethnic Russians and in the eastern parts of the country a large percentage of the people are native Russian speakers, so not exactly the same as Afghanistan.
Things are pretty quiet right now but that could change in a heartbeat if this goes down in Ukraine, and it seems like the people who can make it happy are eager to see a new war. Prepare accordingly.
Posted by Arthur Sido at 7:17 PM