Deism: The Limitation Of Language 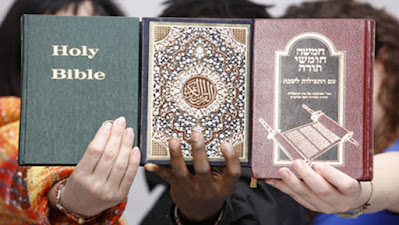 That brings us to The Big Issue Of Monotheism: Which book is correct?
Billions of people believe in one book, billions more in another, the (arguably) oldest of the three believes in something completely different. A whole bunch of people are wrong and being wrong has some pretty awful repercussions. What is more, billions of people in the various camps have virtually no exposure to the other books so they really don't have the chance to compare the different holy books. How many Christians sat down and read the Bible (and very few have at all) as well as the Quran and the various holy writings of Judaism, Buddhism and Hinduism and then decided which one was correct? Or substitute a Muslim or Hindu or Jew and ask the same question. I would wager the number of people who had actually investigated all of their options before deciding is functionally zero. Maybe you did, that is fine, but it doesn't negate my point that generally your cultural setting determines your holy book to accept or reject in it's entirety.
Further muddling the competing claims of authority is the idea of tradition, or extra-Scriptural teachings that are formally or informally given the weight of Scripture. This is most prevalent in Roman Catholicism/Orthodoxy and Judaism but it is very common as well in Protestant circles. I don't know as much about Islam in general and their sacred tradition, or Sunnah, in particular but like a lot of sacred tradition it is deeply divisive and no one seems to agree on which tradition is valid. So within these religious groups you have further schism based on non-canonical teachings that are often contradictory and mutually exclusive within a broader faith tradition. It makes it pretty perilous to figure out which one is correct.
Or perhaps, as I believe, none of them are correct at least not completely and sufficiently, not least because none of them can truly make a claim to divine origin. At best what we have are copies of writings that are attributed to men like Moses, Muhammad and Paul but no one has anything actually written by those men. I am very familiar with Christian apologetics and I assume that Islamic apologetics for the Quran are similar but what it all comes down to is a leap of faith. You believe the Bible or the Quran or the Torah is the word of God because you want to believe that. 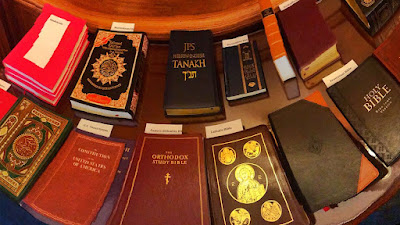 Back to the main point. Even if you decide that one holy book is correct and the others are all incorrect by whatever process brings you to that point, there are still all sorts of problems and the biggest problem is this:
How do you authoritatively describe a being(s) that is by definition eternal and limitless with human language that is based on describing what is observable?
Humans have always tried to do this, from early tribal religions to more formal belief systems like the Greek and Roman pantheons and for the last two thousand years a trio of monotheistic religious systems. All of these religions have tried to explain and describe what humans instinctively understood, specifically that there was something apart from and over the natural, observable world. Who or what that is has been the age-old question.
My opinion is that this task is inherently impossible and attempting to force the divine into a box that we have created in order to authoritatively quantify and describe the divine is inherently flawed and often quite dangerous to the pursuit of the truth.
The human mind cannot comprehend the eternal divine, our limitations are too many and our capacity too finite. We can seek after the eternal divine but we should not arrogantly presume our ability to capture anything other than the most superficial of understanding. As much as I enjoyed the systematizing of the divine for much of my adult life, looking back now it seems ludicrous.
Even more so our language lacks even a rudimentary ability to put into words that which our mind cannot begin to comprehend. If you cannot conceive it, how can you describe it? Anyone who does any writing knows that there is a huge gap between thinking of something and putting it on paper. Some of my deepest blog ideas were a train-wreck when I tried to write it out.
That hasn't stopped mankind from trying to do just that for all of human history. God is this, God is not that. God wants you to do this, God doesn't want you to do that. Endless debates and arguments that often spilled over into shedding blood over our attempts to force others into our beliefs when our arguments proved inadequate.
While others are free to believe as they wish just as I claim that right for myself, my hope is you will consider my main point here and not get caught up in the weeds. With human minds incapable of grasping the eternal divine and human language inherently unable to express even our admittedly limited mental capacity, can we truly believe that we can describe authoritatively and exclusively something that is unlimited and eternal? If we cannot ever hope to do so, what does that mean for our various preferred organized religious systems?
My answer to that is a bit murky. Rejecting all forms of organized religion as essentially a mechanism to control human behavior and create an elite class that wields that control in the form of clericalism, I have come to the place where I simply feel I need to accept that the question of the eternal divine is not one that can be answered by humans with any level of certainty and definitely defies the attempt to describe it with authoritative human expressions. That does not mean one should abandon the search, but simply that the search takes on a new meaning and method when you recognize that the answer will be necessarily incomplete this side of the grave.
Without that certainty you can find yourself on emotional thin ice. Life is much easier when the biggest question of all is something you can speak to with certainty but then again truth is never something that should be easy to grasp. We will talk more about that in an upcoming post.
Posted by Arthur Sido at 10:25 AM

Email ThisBlogThis!Share to TwitterShare to FacebookShare to Pinterest
Labels: deism