Be Careful Out There 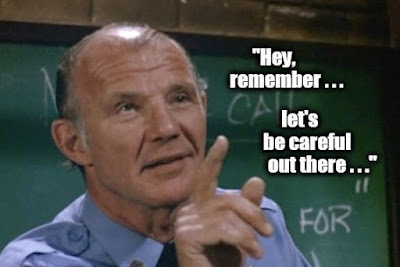 Listen to Phil Esterhaus and be careful out there.
You might think that just because what you are doing is legal it means you are not going to find yourself in hot water with the fuzz. You would be wrong.
Enter Reuben King.
Mr. King is an Amish dairy farmer in Pennsylvania who caught the attention of the ATF of all groups. What was he doing to warrant their notice? Was he engaged in drive-by shootings via horse and buggy at rival dairy farmers? Was he smuggling firearms to Chicago and NYC? Nope.
Mr. King was selling firearms he had purchased privately and legally to other people, privately and legally....
ATF agents seize guns from Leacock Township property; Amish farmer admits sales
....On Tuesday, Reuben King said the guns taken were part of his personal collection and that the foundry had nothing to do with the gun sales.
“I’m not going to deny that I was selling some,” Reuben King said. Gun sales were not advertised and he does not know how he may have come to the ATF’s attention.
“This is my business: I’m a dairyman,” he said inside a barn filled with cows as he swept the concrete floor with a pushbroom. He has about 50 dairy cows.
Rueben King said he primarily sold long guns to the Amish for hunting, though he admitted he sold some to non-Amish, too.
“I was not dealing in handguns, positively not,” Rueben King said.
He was selling long guns that he possessed legally and sold those firearms legally. The problem? According to the ATF he was selling too many. How many is too many?
Don't know.
Reuben King pointed out that the government can’t tell him how many guns a person may sell or over what timeframe before a license is required.
That is true.
For example, I have a Federal Firearms License because I am engaged in the retail sale of firearms as a business with the intent of making a profit. It is pretty obvious, I have the FFL, a tax ID number, an LLC, a state sales tax number. I report my sales and profit when I file my taxes.
But the definition of what constitutes being engaged in the "business of selling firearms" is not so clear for others. Here is what the ATF says about it: 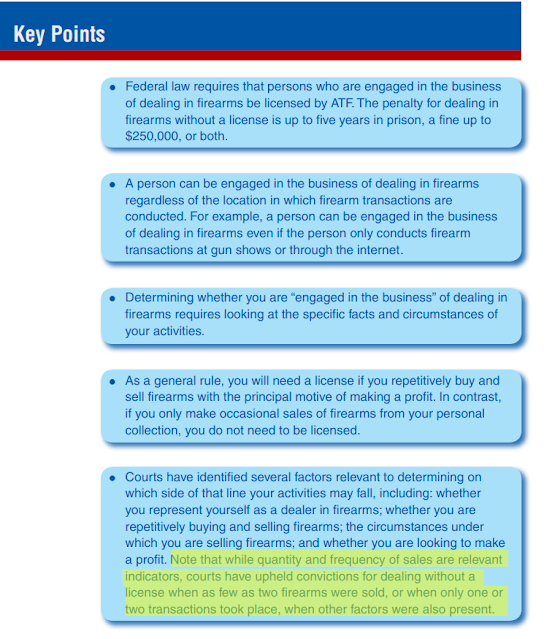 Highlighting is mine but it is critical. If you sell as few as two firearms you can be considered a "dealer" and if you don't have a Federal Firearms License you are in violation of the law. What determines whether you are a dealer or not in the eyes of the ATF comes down to "facts and circumstances". In other words it is up to the ATF to decide so no one really knows. I have met people in my life who were constantly buying and selling guns, often just because they like buying and selling guns, adding to their collection, getting bored and selling the gun and buying something else. I imagine a lot of them made a profit doing so. Are these people "dealers"? Maybe, maybe not.
That is a hell of a way to run a legal system.
So why not just make a set of rules saying if you sell more than X number of firearms in a 12 month period, you are a dealer and need a license?
Two reasons.
One, once they established such a clearly defined rule it would be subject to challenge. Firearms are a legal product and private individuals buying and selling privately is a legal activity with some rules. If Big Country Expat would come up from Florida to purchase a shotgun from my private collection, that is fine and dandy. He cannot purchase a handgun from me as I know he is not a resident of Indiana. I am not required to get any ID from him or do any paperwork, although it is suggested that you keep a record. A private party sale is perfectly legal but how many of those you can do before you are considered to be a de facto "dealer" is unknown. Without a rule, it is harder to challenge in court.
Two, it creates a chilling effect to not have a clearly defined rule. The ATF hates that tens of millions of firearms in this country are in circulation without a clear paper trail of ownership. How many millions of people own firearms that they bought so long ago that there isn't paperwork or bought privately from a buddy or a relative or that they inherited from their grandpa? The FedBois can't stand that people own something that they don't know about and especially firearms. If you can scare people into not buying and selling firearms, something that again this is perfectly legal in most states, then it helps to control the flow of firearms in the country and makes it easier to police what we own.
It is bad enough that we have so many laws infringing on our Constitutionally guaranteed human right to possess arms for self-defense. It is far worse when those laws are so vague as to make one person a criminal for doing something a person five miles away is doing and not getting bothered. Laws and rules should be clear and based on definable rules, not the whims of a particular ATF agent. The more a law is based on "facts and circumstances", the more likely it is to be abused as it is in this case.
What happened to Reuben King is likely this: someone for some reason called in a tip to the ATF claiming he was selling guns for profit. That person, whoever they are, is an asshole and should get their ass kicked. The ATF decided for whatever reason that an Amish guy selling long guns, guns I assume have never been tied to a single crime, is somehow a law enforcement priority while blacks in America's cities have been on a two year shooting rampage. Harassing a non-resistant White Christian is a lot easier and less dangerous than dealing with black and mestizo gangsters.
My point is this: be smart. Don't give them any excuses. Keep what you are doing low key, even legal stuff, because all it takes is for some asshat to call you in and the ATF might be breathing down your neck. Just because something is legal it doesn't follow that the ATF won't decide that you are "in the business of selling firearms without a license". Your firearms aren't going to do you any good in some evidence locker somewhere while you fight an expensive court case to get them back.
Posted by Arthur Sido at 2:59 PM