Earlier in the week I mentioned a decent deal on a L.A.P.G. weapon light. Well it showed up today so of course I had to toss it on a pistol. Initially my thought was to put it on my PSA Dagger but then I thought I would try it out on another pistol I don’t carry frequently, a Springfield XD  in .45 ACP. Yes, I know some people have issues with Springfield Armory but I really like the XD even though it has that gay “Grip Zone”. I need to get some Talon grips to cover that up. The light fits perfectly and is super bright, supposedly 800 Lumens. 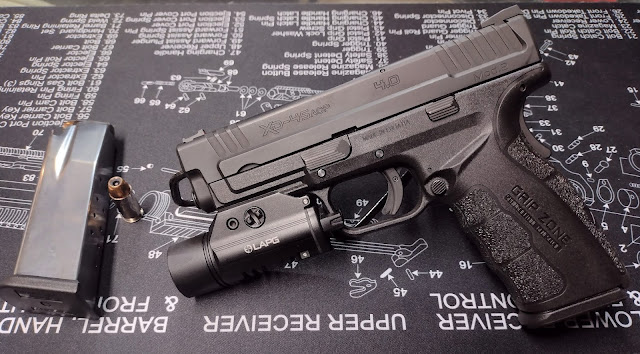 This is going to be a replacement for my current nightstand pistol. The light is a double edged sword, it shows you what is in front of you but it also shows others where you are, but in the close confines of my house and with kids living at home I need to have a light source. The XD comes with a fiber optic front sight that is easy to pick up in poor light conditions. I have it loaded up with Federal Premium 165 grain Hydra-Shok Low Recoil jacketed hollow points. It holds 13+1 rounds which is a lot for a .45 and does so without the enormous grip of some higher capacity .45 autos.
It isn’t a lightweight gun…. 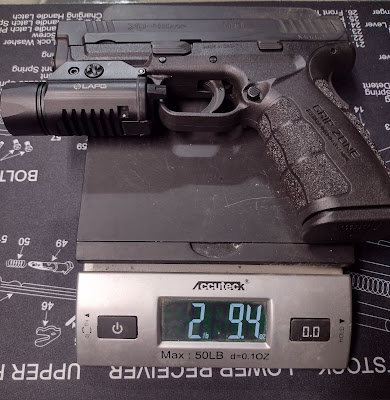 But that is OK because again I am not carrying it around and the extra weight helps with the recoil. Not a great choice for concealed or just everyday carry but I have other handguns for that. This is just a “something went bump in the night” gun, and with 13+1 Hydra-Shok .45s plus an extra mag with the Federal .45 Auto 230 grain Personal Defense Punch, it should be plenty of firepower and the lower velocity of .45 should hopefully mean less over-penetration in a house full of people.
Obligatory “Stopping Power” and “Two World Wars” for my .45 ACP peeps.