Two Can Play That Game

On the surface the two issues seem to have nothing in common: abortion and gun rights.

Gun rights are explicitly mentioned in the Constitution and have a historical precedent for their inclusion. Defending the 2nd Amendment is an essentially exclusively right-wing/conservative cause. There simply are not any significant liberal/leftist defenders of the 2A.
Abortion “rights” are the polar opposite. They are not mentioned explicitly or even implicitly by any plain reading of the Constitution. The Founders couldn’t have imagined that anyone would find a “right” to kill a baby in utero from what they had written. While there are some left-libertarian defenders of abortion, in general it is a mostly leftist cause.
Where the similarity is found is in how opponents of the two, pro-life/anti-abortion and anti-2A forces, while ideologically dissimilar are in practice using the same tactics.
This is a comparison I have made before. Both sides know that a direct, all-or-nothing front assault, isn’t likely to work. There is no appetite in either chamber of Congress for an overt abortion ban, not even in the times when the GOP held both chambers and the White House. It just wouldn’t pass and likely wouldn’t survive SCOTUS review anyway.
Nor is there much room for an outright gun ban like Diane Feinstein has been pining for all of these years. Even now with a split Senate, a Dem controlled House and the puppet in the White House, they have done zero on gun control despite it being a prominent part of the Biden platform. Sure stuff gets put forward, mostly to give the gun rights groups something to fund raise about, but it never goes anywhere and barring the expected but yet to materialize false flag it won’t. Anti-2A groups are super pissed that even the straight from central casting school shooting in Oxford, Michigan barely move the needle.
On abortion and gun rights the nation is irreconcilably divided and each side is more entrenched than I can ever remember. That leaves the advocates for abolishing abortion and gun rights alike needing a different tactic: incrementalism
This is on display in the anti-abortion realm as I have noted before and with the Mississippi anti-abortion law being heard before the SCOTUS and with a Texas law being allowed to stay in effect by SCOTUS during the appeal process, the squeeze on legalized infanticide is growing tighter and it is possible that we will see a situation by the Spring of 2022 where abortion is de facto banned in much of the country, including some of the most populous states like Texas and Florida. 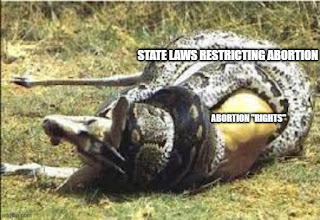 But as is always the case, two can play that game. California’s loathsome Governor Gavin Newsome is using the model of the Texas law to further restrict gun rights in Commiefornia.
Gavin Newsom says he’ll use Texas abortion law as model for gun-control measure
The Texas law uses an interesting new maneuver in the fight to eliminate abortion. From NPR: Supreme Court refuses to block Texas abortion law as legal fights move forward
At issue in the case is S.B. 8, a law enacted by the Texas legislature to make constitutional challenges to the state’s newest anti-abortion law impossible. It was avowedly written as a way to skirt more than a half century of Supreme Court precedents establishing that the way to challenge the constitutionality of a state law is to sue state officials. So S.B. 8 removes enforcement of the state law from the hands of state officials and instead delegates enforcement to private citizens, empowering them to sue anyone who “aids and abets” an abortion after roughly 6 weeks, and putting a high price in damages for each abortion.
Don’t mind a little editorializing by Nina Tottenberg in that paragraph. You would think a member of The Tribe would read the Old Testament or something. Anyway, here is what Gavin Nuisance had to say about the issue: 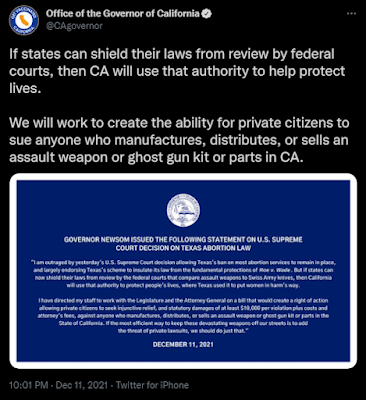 From the linked article:
He said he has already directed his staff to work with the legislature and the attorney general to craft a bill that would allow private citizens to sue those who manufacture, distribute or sell an assault weapon or ghost gun kit.
That should ensure that any firearms manufacturer still inexplicably in California will move out to a decent state.
As an aside, I get why some people still live in California but please don’t insult the rest of us by pretending that the state is really a bunch of freedom loving conservatives. POS Gavin Newsome won election in 2018 by beating Republican John Cox 62% to 38%, a margin of around 3 million votes and an extraordinarily high turnout percentage, up 32% from the prior election. The policies of Newsome are what the vast majority of people in California want. Before Newsome Governor Moonbeam Jerry Brown won two terms and the state is getting more liberal, not less. The last “Republican” Governor was Arnold and he would be considered a far left liberal in any normal state. So no, there isn’t going to be a groundswell of right-wing patriots in California. The best we can hope for is that they devour each other before they can infect the rest of the country.
Anyway, this will be the model for lawfare on the state level against the 2nd Amendment going forward. If you can make it prohibitively expensive to manufacture and sell firearms to civilians, companies will stop doing it or at least make it so costly that consumers won’t be able to afford them. This will work not only with actual firearms but also with ammo, parts, accessories, etc. I wouldn’t be surprised to see Holosun or some other optics company being sued after a shooting for making a firearm “more lethal”.
Legal strategies always cut both ways.
Of course when the false flag mass shooting goes down, all bets are off at the Federal level. But until then expect to see the blue states clamping down more and more on legal firearm ownership while ignoring the epidemic of non-White violent gun crime. At the same time red states will keep enacting abortion restrictions.
The practical dissolution of the Union will continue politically until it becomes time to move beyond politics and into the realm of the more tangible methods of dissolving the ties that bind us.