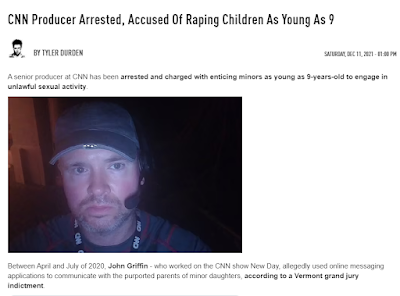 CNN Producer Arrested, Accused Of Raping Children As Young As 9
The 44-year-old CNN producer from Stamford CT, who worked 'shoulder to shoulder' with Chris Cuomo according to the Daily Mail, 'used Google Hangouts and Kik to convince the mothers that a "woman is a woman regardless of her age," and that "women should be sexually subservient and inferior to men," according to a Friday indictment.

In June of 2020, Griffin advised a mother of 9- and 13-year-old daughters that the mother’s responsibility was to see that her older daughter was “trained properly.”  Griffin later transferred over $3,000 to the mother for plane tickets so the mother and her 9-year-old daughter could fly from Nevada to Boston’s Logan airport.  The mother and child flew to Boston in July of 2020, where Griffin picked them up in his Tesla and drove them to his Ludlow house.  At the house, the daughter was directed to engage in, and did engage in, unlawful sexual activity.

Oh, you thought that the talk of being ruled by a cabal of pedophiles was just a conspiracy theory? This guy was buddies with Chris Cuomo and likely the rest of the degenerates at CNN.
The thing that keeps me up at night is running out of rope and ammo because when it starts, there is a long list of people clamoring to be first in line.
Posted by Arthur Sido at 9:59 AM