Things That Makes Sense In 2021

If you own a calendar, you might notice that next Saturday is Christmas. Traditionally what this means is that this weekend is one of the biggest shopping periods of the year as people scramble to purchase last minute Chinese made crap for friends and family. When I worked in retail this was a weekend to dread because every place was going to be packed with customers and many of those customers are rude/idiots. For corporate, this is a weekend of massive sales volume on stuff that is mostly high margin. The profits are enormous.
So for something like this to happen is unheard of....
Maysville Road Walmart temporarily closing due to high levels of COVID-19 cases
This is the closest Wal-Mart to us. I don't shop there, like ever, unless I have some Amish who want to go. They are not just shutting down for a few hours....

From 2 PM on Friday afternoon to 6 AM on Sunday, meaning they are losing the entire afternoon and evening on Friday and all day on Saturday. The sales they are losing are enormous. Good news for the Meijer across the street as shoppers show up at Wal-Mart and are turned away, many will just cross the road and shop at the competition. The reason has something to do with the Chinese bioweapon Covid-19 and I assume a certain threshold of employees getting positive tests or something.
What struck me as odd is that Wal-Mart is infamous for a customer base that is obese and unhealthy under the best of circumstances. There is a reason there is a whole genre of photos and memes devoted to the people of Wal-Mart.
If Wal-Mart really wants to protect the health of their customers, might I suggest they stop carrying soft drinks and candy? That would do far more for the average Wal-Mart shopper than spritzing the entire store with disinfectant.
These are the news stories that apparently make sense to a lot of people in 2021 and not enough people are questioning this insanity. 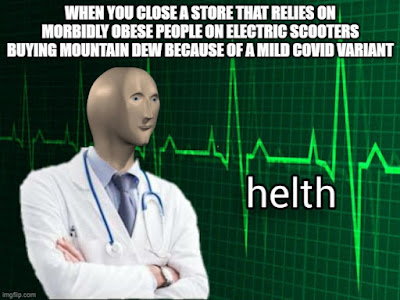