They Can’t Keep It Under Wraps Much Longer

While they are employing every means of distraction they can, with a couple of big and massively lethal exceptions that are not off the table, people are noticing more and more just how much inflation is rising.

US inflation surges to 39-year high as consumer prices soar
Consumer prices surged at the fastest pace in nearly four decades in November as Americans paid more for practically everything from groceries to cars to gasoline, solidifying hot inflation as a key trait of the economic recovery.
The consumer price index rose 6.8% in November from a year ago, according to a new Labor Department report released Friday, marking the fastest increase since June 1982, when inflation hit 7.1%. The CPI – which measures a bevy of goods ranging from gasoline and health care to groceries and rents – jumped 0.8% in the one-month period from October.
So-called core prices, which exclude more volatile measurements of food and energy, soared 4.9% in November from the previous year – a sharp increase from October, when it rose 4.6%. It was the steepest rate since 1991.
Maybe the Feds creating money out of thin air and spraying it all over the country might be leading to some modest price increases for consumers?
We were shopping for a new minivan for my wife, the first time we had looked at a new car in a very long time. Even basic model minivans were running $40,000 or more and the payments were over $600. That is assuming you can even find one. Look at car dealers when you drive by, many of them have their cars spread out across the front of the lot to try to disguise that most of the lot is empty.
Food inflation is also hitting people in the pocketbook and what is worse it appears to be poised to get drastically higher next year, coupled with honest-to-goodness food shortages…..
Food Price Inflation Next
What caught my eye is something I am hearing rumblings about from a lot of sources: fertilizer shortages next year, especially anhydrous ammonia. 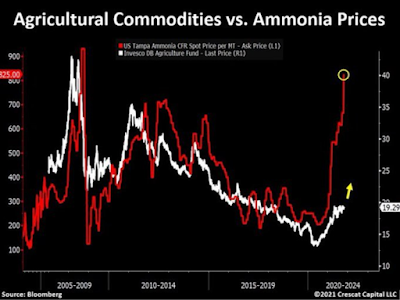 For the non-farmers in the audience, anhydrous ammonia is one of the most critical fertilizers, a fertilizer that is used in corn production that contains an enormous amount of nitrogen, the key nutrient in corn yields. Our “food” system depends on huge quantities of cheap corn that is used in all sorts of food you find on the shelves and even more critically is the main component in feed for livestock, chickens, beef and hogs alike. If anhydrous ammonia is less available or gets too expensive, farmers will have to use less and that will hurt yields which in turn will lead to shortages in the supply chain. It has the potential to be really, really bad news.
People are already feeling it and it sounds like there is not only no end in sight but things are likely to get much worse.
What are your plans to deal with life under hyperinflation, food and energy shortages and the civil unrest that accompanies it?