Like an annoying sound in the background, most Americans are trying to tune out the drumbeat of news stories that keep slipping through the censorship. But the noise is getting louder and even the media is forced to recognize it.
2020 was not an anomaly when it comes to urban gun violence, an aberration brought on by lockdowns. It was just a stepping stone to the increasing chaos in our cities.
'It's just crazy': 12 major cities hit all-time homicide records 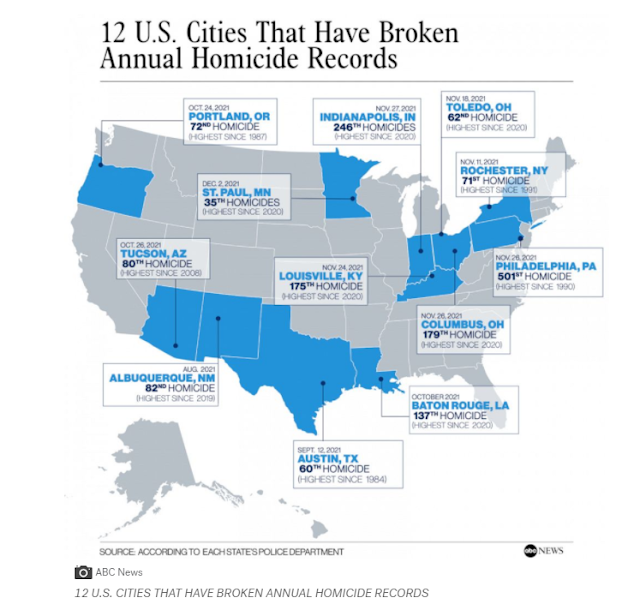 This is hitting pretty close to home. Indianapolis is the capital of our adopted home of Indiana and Toledo, Ohio is the hometown of both my wife and I. Our first three kids were born in the Toledo area. As I often tell people, just a few years ago Indianapolis was rated the most livable big city in America. Now it is a slaughterhouse of blacks shooting other blacks and the occasional White person. As of the 12/8/21, there were a couple of other cities closing in on new records:
Among the major cities on the brink of setting new homicide records are Milwaukee, which has 178 homicides, 12 short of a record set in 2020; and Minneapolis, which has 91 homicides, six shy of a record set in 1995.
When this article came out, Chicago was at 739 homicides but it has blown past that figure. 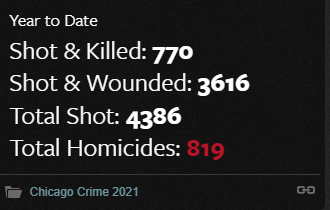 The all-time record for Chicago was 1970 with 974 homicides so it is unlikely that will be broken in 2021 but 2022 is shaping up to be a muy caliente spicy year without any reason to think the tide will turn. No record is safe.
More and more cops are retiring and I would bet that the replacements they are able to get are a major step down from the cops who are retiring.
A workforce survey released in June by the Police Executive Research Forum found the retirement rate in police departments nationwide jumped 45% over 2020 and 2021. And another 18% of officers resigned, the survey found, a development which coincided with nationwide social justice protests and calls to defund law enforcement agencies following the death of George Floyd at the hands of Minneapolis police officers.
Again, why would a young man in 2021 want to pursue a career in law enforcement unless you just want a job where you get the chance to beat people up and maybe get to shoot someone?
When you dig deeper into the bloodbath you start to see the people behind the statistics. In Columbus, Ohio, one of the cities with a new murder record, two young black children were killed in a car along with an adult that I assume was also black.
Children may have been targets in Ohio triple homicide, police say 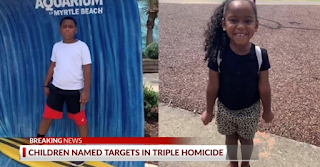 The two children who were gunned down in front of a Columbus, Ohio apartment building one week ago may have been targeted in a triple homicide, police said Tuesday.
Det. Terry Kelley said the shooting that left Londynn Wall-Neal, 6; Demetrius Wall-Neal, 9; and Charles Wade, 22; dead was a planned attack. He showed a picture as evidence of a Nissan Altima from model years 2010-12 with the rear license plate removed.
During an update Tuesday, Kelley said whoever fired the gunshots knew the two children were inside the car, saying it is unclear if the shooters intended for the children to die, but added it’s clear the shooters didn’t care.
Whether they were intended as the targets or not, it takes a special sort of animal to shoot a 6 year old little girl. Many would call me a "racist" but you won't find me or people like me shooting little black girls. When I was a student at Ohio State in Columbus there was some property crime, bikes getting stolen and that sort of thing, but almost 200 murders in one year would have been unthinkable.
In Houston, Texas last Sunday a "celebration of life" event was being held for a a guy nicknamed "L'il Daddy" who had been killed in a different murder a few weeks ago. As often happens at "celebration of life" events, more people got shot. A lot more.
Suspect on the run after 1 dead, 13 injured in drive-by shooting at vigil in Baytown, deputies say
14 people shot but the amount of coverage this is given compared to the White school shooter in Oxford, Michigan is startling if you haven't been paying attention. As the injured were brought to a local hospital, everyone pulled together and supported each other. Just kidding!
Once everyone started arriving at the hospital, another incident occurred.
"When everyone got to the hospital, a large fight ensued and we had to contact other agencies to help with that large fight," said Campbell.
It is completely rational to respond to a mass shooting by getting into a fight at the hospital where the staff is trying to save the lives of people who were just shot. The people at the hospital were what you would expect.... 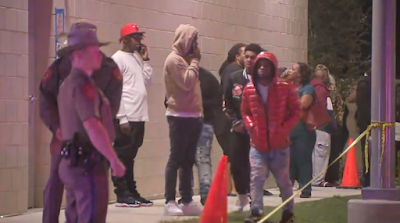 Another city not listed in the first article is also experiencing a crime wave:
“We’re really behind”: Aurora scrambles to address rise in youth gun violence after 13 teens shot in two weeks
The Nov. 15 shooting outside Aurora Central was the first of three mass shootings that injured 13 teenagers in Colorado’s third-largest city in less than two weeks. The shootings ignited peace rallies, emergency community meetings, gun buyback programs and increased school security across Aurora.
The rash of mass violence in November and a year-over-year increase in the number of teens killed and injured in Aurora shootings highlight what some city officials and community leaders described as a lack of attention by the city to the issue of youth violence until last year.
As usual the article is all about needing more "funding" for "violence prevention". That has worked great at stemming the flood of minority shootings in America.
The chaos is getting worse, the criminals are becoming bolder. Why wouldn't they, knowing as they do that the odds of getting arrested are slim and even if you get arrested, your chances of spending any significant time behind bars is low and getting lower.
Libertarians tell us that the "War On Drugs" is the real problem and without that gang violence would go away but as the rash of smash-and-grab robberies shows, there is a part of the population who will never be decent human beings and instead will always find some illicit way of getting money. It isn't a lack of jobs, it is a lack of character and an inherent inclination to prefer crime and violence over working. The threat of the legal system and jail time helped keep this in check for a long time but now with that threat gone, these criminals are unleashed to live out their base nature. According to Hey Jackass! in Chicago not only is carjacking skyrocketing but the arrest percentage is plummeting. 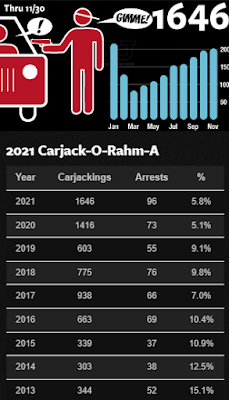 There are an average of around 5 carjackings per day in Chicago and while as recently as 2016 arrest percentages were in the double digits, over the last couple of years it is below 6%. If you carjack someone you have a better than 94% chance of getting away with it.
Along with smash-and-grab robberies, carjacking is rampant throughout the country as is an even more troubling type of crime, "follow home robberies", especially in Los Angeles:
California follow-home robbers wore ‘police-type’ gear while forcing victims inside at gunpoint, video shows
A Los Angeles Police Department (LAPD) spokesperson told Fox News last week that follow-home robberies seem to be "popping up everywhere" in the city.
The LAPD announced in mid-November that it is investigating more than 110 robberies involving at least six different street gangs in which the victims were followed home. The LAPD had issued a warning regarding the "follow-home robberies" earlier in November after a series of incidents.
Having your car stolen by a carjacker or a store smashed up is one thing but having these POS follow you home and then force entry into your house is very different. According to CNN, many of the people being robbed are followed home from high end stores.
Investigators found that people were followed from places including like Melrose Avenue, the Jewelry District as well as high-end restaurants and nightclubs from Hollywood and Wilshire area, police said.
In a carjacking they are going to try to get you out of the car and take off as fast as possible but if they get into your home? Things can go from bad to really, really bad in a hurry and these animals know that the odds are strongly against one of their victims being armed and prepared to defend themselves. No way I am giving access to my home and family to a handful of thugs, I will take my chances but anyone living in these areas needs to be constantly on guard. Or better yet, get the hell out of there.
Chaos breeds chaos. With what passes for law and order already breaking down, it is indicative of a broader societal issue. As we are seeing with the smash-and-grab and follow-home robberies, criminal activity is clearly leaking from the inner city and into the nicer areas. The police and the legal system are already proving to not be up to the task of enforcing the law, hampered by both the sheer volume of crime and the general lack of support from the government.
Our civilization depends on people feeling reasonably secure in their person and property and a reliance on the legal and law enforcement system to reinforce that security. Absent this life will begin to look a lot like South Africa or dystopian movies with people in rural areas making armed fortresses out of their property and people in the more populous areas relying on walls, gates and private armed security. A consumer spending driven economy relies on people being able to go buy stuff or at least having delivery drivers able to safely deliver packages but both of those are threatened by the crime wave.
The supply chain issues and raging inflation won't be the big concern when people can't safely get food and other necessities. Right now most of the violence we read about in stories like these is relegated to the black and brown communities but it is starting to look like that won't be the case forever. When the ritzy neighborhoods where our elites dwell are invaded by black crime, will we finally start to see it getting the attention it requires?
Posted by Arthur Sido at 11:33 AM