All of us are in different places. Some of us are well established in our careers, others just getting started. Some are like me and have drastically changed their career path, perhaps more than once! We might have a wife and kids or be on our own, retired or just starting out in life.
Depending on where you are in life and your specific circumstances, your financial means and a host of other factors will be different. As a personal example, our main small business provides us with all of the income we need for the household basics, plus some savings here and there and we are still able to splurge on unnecessary stuff, eating out and trinkets, pretty much whenever we want. It helps that we don't have expensive tastes in general, while I grew up thinking it was normal for a kid to eat out weekly and have steak or crab legs, now our idea of a treat is a local Mexican place where we can both eat including the tip for under $30. Our little side-gig gun shop is mostly for fun and also a way to fund my firearms purchases. That also means buying my gear at wholesale, something most people can't do.
Thanks to the utter ineptness of the ruling junta, and if we are to be honest the incompetence (often intentional) of every administration stretching back at least to George H.W. Bush, including Orange Man, the personal economic situation of people right now varies drastically. Some people are doing absolutely great, an OTR trucker I know says young guys who are pushing are pulling down $40k per month, while others are really struggling. Jobs are plentiful in most places and wages are way up but inflation is destroying those wage increases and then some.
If you are one of those doing well, and even if you have lots of guns already, you might be tempted to...BUY MOAR GUNZ! 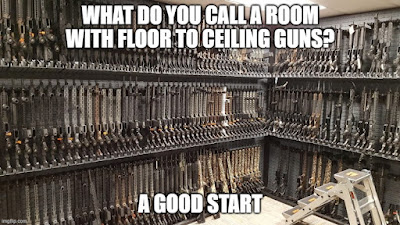 I get that and might occasionally indulge in some of that myself. Something I heard a little about on a podcast and that got me thinking might be worth considering, at least for those who are doing well right now.
One, you can only shoot so many guns at a time. One is none and two is one is the rule and most of us stretch that out. But after you have enough rifles and handguns for yourself and everyone in your household a few times over, the extras are just....extra.
Two, not everyone who is useful is going to be prepared as well as you. Your initial reaction might be "fuck 'em, they get what they deserve" and in many cases that might be true. Your asshole nephew who voted for Biden and is quintuple jabbed, the one who treats you like a leper? Whatever happens to him is on him, not you. But what about your cousin the carpenter who just kept his head down and tried to follow the rules, until there weren't anymore rules to follow? The one with a sweet wife and three wonderful little kids, are you going to let them get devoured by the mob because he didn't heed your warning? Or your neighbor the deer hunter who is lethal with a 30-06 and maybe has a revolver for protection but never thought he needed anything more?
There are going to be a lot of people who are not prepared but still deserve your help, either because they are blood or because they are useful. It is short-sighted to dismiss them. You have to sleep sometime and playing the Lone Wolf Survivalist Dude is a great way to end up a corpse. In short, you are going to need friends and those friends might not, in fact probably will not, be as well prepared as you. You can smirk at them when the feral urbanite hordes are overrunning you or you can be smart and think ahead a little bit.
So perhaps instead of buying some safe queen gun you don't really need, you get an inexpensive but reliable AR set-up or three? Or maybe a few decent 9mm or 12 gauges? There are a ton of inexpensive 12 ga pump shotties out there that are decent quality. Maybe it isn't a gun to impress the boys at the range but it works.
Right now is a great time to stuff the safe with guns, even if it isn't a great time to get ammo. There are lots of guns I would like to get but few that I need to get right now. Sure I haven't ever owned a .44 magnum revolver and that sounds like fun to have but I don't really need one. Having a few extra AR-15s might be a better investment.
In the same school of thought, maybe invite those same people out to shoot a few with you. You don't need to hard sell them on "prepping" necessarily but getting them used to shooting will pay dividends later. Handing out rifles to people who don't know how to load them isn't all that useful.
Not everyone will be as tacticool as you, so you can either die alone with a smug expression about your preps on your face or maybe invest in other people now. Of course this is not intended to replace your own preps, if you aren't personally in the place you need to be, invest in that but if you have a good foundation and if you have some extra income, maybe it is time to start thinking about being a resource for people who can in turn be a resource to you...
***Edit*** Check out this follow-up post, more good thoughts on this topic from Matt Bracken: Addendum From Bracken
Posted by Arthur Sido at 7:28 AM