My wife stumbled across this one. 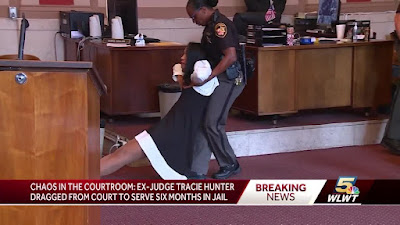 Back in 2014, a Judge-Of-Colour, one Tracie Hunter, found herself on the wrong side of the courtroom. She had been accused of providing confidential documents to her brother who was in danger of losing his job because of a super professional act:
The other charges filed against Hunter on Friday involve allegations that she used her office to help her brother, Stephen Hunter, a Hamilton County Juvenile Court worker who was fired for punching a teen inmate, and using a county-owned credit card to pay for legal filings involving lawsuits against her.
She is also accused of improperly using her power as judge to get access to her brother's personnel file after he was fired. She received some documents that normally aren't given to attorneys representing fired workers and is accused of trying to give them to her brother's attorney. She also is accused of improperly arranging for her brother to work at the court that would allow him earn overtime payments, prohibited for relatives.
How delightful!
Anyway, she was convicted of a felony and as usual the blacks in the courtroom reacted with dignity. Just kidding!
Alexa, what is "impulse control"? At one stage in the court when she was found guilty, an angry blaque in the crowd shouted that the city of Cincinnati would burn.
A grown ass woman who was formerly a judge goes limp and has to be bodily dragged from a courtroom.
It just so happens not only is she a disgraced former judge and a convicted felon, she is also....
Pastor Tracie Hunter! 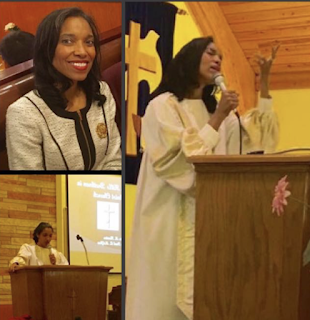 Basketball-Americans love them some disgraced people as pastors.
She got caught but how many other imbeciles are elected as judges by their fellow imbeciles that are just as corrupt? More broadly speaking, when judges like this are elected by dimwits because they yammer about "justice" and crap it makes the entire legal system corrupted. Where once we elected people who were at least intelligent and familiar with the law, more and more we have dipshits like Tracie Hunter who rot the system from within.
Again, our system only worked when the people entrusted to run the system actually had the character and basic intelligence to keep it running. As the competent retire or are forced out, replaced by people like Tracie Hunter, the system begins to break down. The replacement has been going on for decades but we are just starting to see the strain on the system as mayors, Congressman, judges, chiefs of police and other public servants are held by the dregs of society.
A corrupt, incompetent judge here and there isn't deadly to the system but when the number of morons hits critical mass, the strain becomes lethal. We are at that stage right now.
Find people around you that you can rely on because the people in charge are dangerous and incompetent.
Posted by Arthur Sido at 11:26 AM