In 2021, there are not really a significant number of people who truly experience “food insecurity”. The human experience for all of our existence has been the daily search for sufficient calories to get us to the next day so we can get more calories. Generally speaking, the wealthy had plenty of food and being fat was seen as a sign of affluence.

For the last couple of decades that has been flipped on it’s head. Now the poorest among us are also generally the fattest. Partly that is the result of poor people no longer working at manual labor but the more significant cause is that the poor in America have access to free food via food stamps/SNAP/WIC and with no restrictions on how the food stamp portion is spent, much of the free food allotment for poor people goes to junk food and soft drinks.
For all of us, ample food in a dizzying variety is just a short drive away. The amount of calories available to Americans with virtually no effort is staggering when compared to most of the history of humanity.
For example, this is what you get from a McDonalds double quarter pounder, medium Coke and medium fries for under $10 without even having to get out of your car. 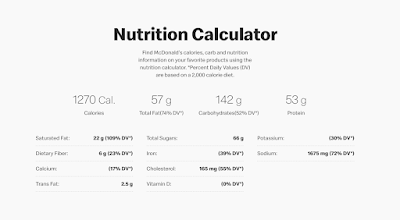 Referring to anything from McDonalds as “nutrition” is pretty funny but the point is that you can get over 1200 calories for less than $10. As you are hard pressed to find any job, even making those quarter pounders, that pays less than $10, that means you are getting 1200 calories with an hour of labor or less.
That is how things are now and how they have been for many years but that doesn’t mean that is how it will be in the near-term future. This is an informative video featuring “lunatic farmer” Joel Salatin talking about what is causing food inflation. As an aside, Joel knows more about where actual food comes from than all of the CEOs of big globalist food conglomerates combined and more about real economics than all of the Federal Reserve staff and professors of economics in America.
It is a process problem, not a production problem. As I have said before, just in time works great until it doesn’t and right now it isn’t working for a lot of stuff. Sure you can get socks from Amazon next day shipped “free” but if you need parts for machinery you might be waiting a week or a month. We are awash in cheap, foreign made consumer goods but struggling mightily when it comes to durable, quality goods. A breaking down to broken supply chain is a problem for everyone.
Food inflation is the first stage and will be problematic but what comes next is food scarcity, and that is a far different proposition. I like what Joel was reinforcing through real life experiences: getting stuff “just in time” simply isn’t working anymore because the process is breaking down.
You can distract people with a lot of stuff but if they aren’t able to get what they want at the grocery, panic buying sets in. We saw that last year and it is quietly still happening although the media doesn’t cover it at all because Orange Man Bad is gone. It wasn’t just toilet paper, lots of meat and canned goods were also gone. It was common to go to a big warehouse club and see a bunch of empty spots where cans of chicken and bags of rice were supposed to be, or toilet paper, paper towels and bottled water.
Big picture, it is likely that in the next 2-4 years your ability to survive is going to depend at least in part on your ability to raise at least some of your own food. Whether that is a garden or a few laying hens, rabbits or a pig, you will need to figure out some way to raise something because you might not be able to rely on aisle upon aisle of cheap packaged calories at the grocery store.
For many of our people, this is going to be very difficult because they live in cities or in some suburban hellscape where Karen and Kevin on the home owner’s association can prevent them from having a garden.
Almost as if you should move out of places where you are completely dependent on the fragile global supply chain for your food….
…someone should warn people about this.