Rules For Me But Not For Thee

This story is about a year old but it keeps lingering out in California.

The L.A. police department has their own private gun store where cops can buy firearms, including firearms that are not available to the general public. This is fairly common in large departments. A manager of the gun store named Archi Duenas was responsible for maintaining their inventory records and curiously never, ever went on vacation. The higher ups finally forced him to take his vacation time and lo and behold, a whole bunch of the boxes in inventory were empty. It seems Archi was stealing guns from the store and selling them illegally for cash, including selling a number to customers who were fellow cops and apparently at least a few who knew the guns were illegally obtained.
The article is a pretty sordid tale of the very people tasked with enforcing the law seemingly deciding that their position makes them not subject to those same laws. But what really got me was this:
This account of the sprawling investigation that began with the gun store thefts is based on dozens of internal LAPD documents reviewed by The Times from sources, including emails between top officials, investigative notes and case summaries, and court records in the case against Duenas. Duenas, who initially faced 25 criminal counts and more than a dozen years in prison, instead received probation in August after pleading no contest to felony grand theft of a firearm and a single misdemeanor count of illegally transferring a firearm.
Exsqueeze me?
The guy was in a trusted position in an official capacity with law enforcement. He was knowingly stealing those firearms and covering it up by never going on vacation, selling those firearms for cash also illegally and without the legally required paperwork to the tune of some 44 firearms. That is putting firearms, at least some not available to the citizens of California, out in circulation. And the guy gets freaking probation for that? The cops who knowingly bought illegal, stolen firearms? Probably nothing happens to them either and there are rumblings of internal backlash over the investigation. The only thing they might get busted for is having an unlocked firearm where kids have access to it, not receiving a stolen firearm.
As a civilian with a Federal Firearms License, if I was doing something similar, would I get probation? No fucking way. If I took firearms out of my inventory and sold them for cash without background checks and a form 4473, the ATF would turn me inside out and the DOJ would charge me with anything they could think of as an example to others.
Last year an FFL about ten minutes from me, Darkside Armory, in Butler, Indiana was busted by the ATF for a variety of stuff, including the owner having unregistered NFA items but also his son who worked there got busted for falsifying 4473 forms, the ATF form every retail purchaser of a firearm has to fill out prior to a background check. The top of the 4473 includes a section to be filled out by the dealer listing the individual firearms sold and how many firearms total were transferred in that transaction…. 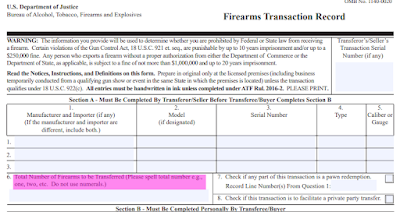 I can see where the guy thought he could pull a fast one, selling a pistol to someone but then putting more firearms on the form that would then come out of their inventory. The thing is the ATF enforcement guys do this for a living so they know the tricks and most can probably smell a lie when they hear it. I have no idea how they caught them but they did and the father and son in this case are facing a combined 21 criminal counts for something that seems in the big picture to be far less severe than stealing firearms from a law enforcement store and selling them illegally but you can bet they won’t get probation.
People obey the law not just because they are afraid of jail but because it is The Right Thing To Do. We follow the laws, even the dumb ones, because most heritage Americans still believe in The System. When stories like this come out and it is apparent to even the most diehard Back The Blue normie that the people making and enforcing the laws are operating with impunity under their own set of rules while threatening us with severe penalties for stepping out of line, the natural impulse to obey the law for the sake of being a good citizen goes in the toilet.
Our rulers and their enforcers depend on our good behavior and our continued tolerance of their bad behavior but with the social contract torn to shreds, crapped on and then set on fire, that reliance isn’t going to be enough pretty soon.