Big happenings in the fake and gay world of American partisan politics.
The Mississippi abortion restricting law made it up to the Supreme Court and last Wednesday oral arguments were presented before the SCOTUS. I didn't watch or listen to the proceedings but from the chatter? It sounds like Roe v Wade might be toast or at least gutted. From "legal expert" Nina Totenberg at NPR: Roe v. Wade's future is in doubt after historic arguments at Supreme Court
The right to an abortion in the United States appeared to be on shaky ground as a divided Supreme Court heard arguments Wednesday on the fate of Roe v. Wade, the court's 1973 decision that legalized abortion in the United States.
At issue in Wednesday's case — Dobbs v. Jackson Women's Health Organization — was a Mississippi law that bans abortion after 15 weeks of pregnancy. Until now, all the court's abortion decisions have upheld Roe's central framework — that women have a constitutional right to an abortion in the first two trimesters of pregnancy when a fetus is unable to survive outside the womb, roughly 24 weeks. But Mississippi asked the Supreme Court to reverse all its prior abortion decisions and return the abortion question to the states.
Oy vey, you can hear Nina kvetching as she said that. That last line a critical one. If this goes as expected, a dozen states will automatically trigger laws on the books that will drastically restrict abortion. Another dozen or more will start the process of banning abortion in their states or at least making it so restrictive as to be functionally banned. The U.S. will become a patchwork of laws regarding abortion but, and this is critical to understand, it will not make abortion illegal in the U.S. but it will return the issue to the states where it belongs.
This is a good thing and you should believe that regardless of how you feel about abortion. Roe v Wade and Casey v Planned Parenthood were wrongly decided, creating a new "right" to abortion that is nowhere to be found in the Constitution and would have been baffling to the men who wrote that document. It is judicial activism and overreach on a ludicrous scale and no one should support that. If you can create a "right" to an abortion from the Constitution, you can create a "right" for anything like two homos getting "married". Oh....
Even better, if the decision comes back as expected and states can go back to governing themselves, the Left is going to explode and that can only be good for /ourside/. There was lots of talk of secession and revolution and of course the hysterical nonsense like this from the usual suspects... 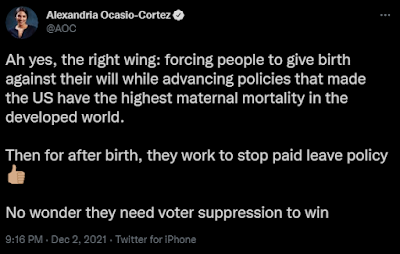 "forcing people to give birth against their will"
I will concede that Alexandria Ocasio-Cortez is one of the very dumbest people in America, even one of the dumbest in Congress, itself a body teeming with imbeciles. Still I have to assume she knows that women do not spontaneously become pregnant. Also I appreciate the nod to the trannie terrorists, "forcing people to give birth". The only people who give birth are women, something that used to be common knowledge. If you are a woman who spreads her legs and doesn't bother to use some sort of contraception, no one is "forcing" you to get pregnant. Getting knocked up after sex is a feature, not a bug. Being pro-choice should mean women having the choice to have unprotected sex but after that, the baby is your responsibility.
It isn't like we are forcing people to get an untested "vaccine" that has numerous side-effects and doesn't really protect you, even people who are not really in any danger from the virus or anything.....
My position on abortion has been as absolutist as possible. Aborting a child at any stage of pregnancy is an act of violence against another human, and the most innocent of humans for that matter. For most of my adult life that position was driven by two factors, one because I am a father who has seen his unborn children in the womb via ultrasounds and recognized early that they were people, not clumps of cells. Second my objection was religiously driven by my Christian faith and today having left organized religion behind I still see an intrinsic value in human life that is derived from a belief in the unique creation of humanity by a divine author. In other words, human life ought to be protected except in cases where a person has forfeited that protection, typically by being demonstrated to be a piece of shit who deserves the needle/gas/firing squad.
Having said that, what about abortion as a pragmatic matter?
In America, abortion is overwhelmingly a non-White issue. Like most acts of violence, it is disproportionately carried out by blacks and to a lesser extent mestizos. See below from the Kaiser Family Foundation:

The Guttmacher Institute, the data propaganda arm of Planned "Parent"hood, confirms this. 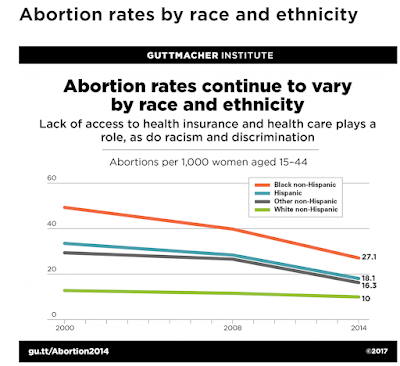 Of course as a leftist outfit they blame this on "racism", not the failure to take very simple and commonly known measure to avoid becoming pregnant. Another consequence of a failure to exercise impulse control.
As a race realist, I can't help but consider that of the over 800,000 abortions every year on average in America, 2/3 of them or at least 528,000 are aborting non-Whites. There have been over 61 million abortions since the Roe v Wade atrocity, and while some whores use abortion as a form of birth control, most abortions are the result of carelessness meaning that there are 61 million fewer people in this country than would have been the case if abortion was not available. If the current statistics held true for the entire post-Roe period, that works out to an additional 20,130,000 Whites, 23,180,000 blacks and 12,810,000 mestizos in America.
Think about the state of our cities right now with rampant and rising violent crime being perpetrated overwhelmingly by blacks and then try to imagine at least an extra 23 million blacks in America today. Roe v Wade became the law of the land in 1973 so the first couple of waves of aborted children would be adults and even grandparents now. Both blacks and mestizos have higher fertility rates in America than Whites or Asians. Chicago alone already has over 800 homicides this year and with a month left in the year has experienced a new record in carjackings... 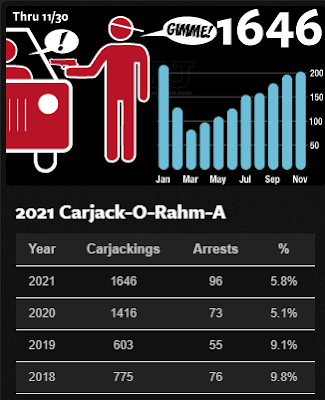 This is not surprising as Chicago has the most black people in a single city in America.... 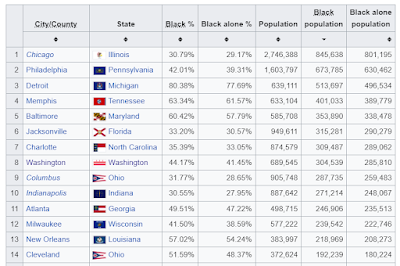 There are around 38,000,000 blacks in America as of the most recent reliable data. Without abortion there could be potentially 23 million additional blacks in the U.S. making their total population 61 million or an increase of 60%. If Chicago had 60% more blacks it would bring their population of blacks from 845,000 to 1.35 million. Instead of 800 homicides this year, they might be closer to 1,300 and over 2,600 carjackings.
Yikes.
A case could be made that without Roe v Wade, Whites would already be a minority in America since 2/3 of aborted children are non-White. At a minimum it would have accelerated the process. And while America is already in the end-stages of collapse, an America in 2021 with 61 million blacks instead of 38 million would have collapsed into chaos many years ago.
When you examine who is getting abortions, another factor is exposed. 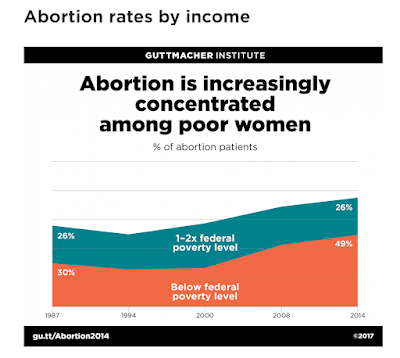 The Federal poverty level in 2021 is $12,880 for individuals. So we see that around 75% of abortions are performed on women who have incomes of $25,760 or less and that half of abortions are performed on women who have an income of under $13,000. There is more to life than income level but I will gently suggest that most women getting abortions are not the cream of the crop. When we volunteered in a local crisis pregnancy center for several years, the vast majority of women/couples who came in were among the poorest of the poor. Just being blunt and honest, they didn't have much going for them and a baby wasn't going to make things any better. I sometimes thought to myself that the babies we were helping to save from abortion would likely end up being clients themselves at the crisis pregnancy center in about 20 years. Not nice but the real world rarely is.
So that leaves me in a bit of an intellectual quandary. Abortion is still the murder of an unborn child. There is no nuance or circumstances that changes that, not even the rare abortion that is the result of rape. In the case where the mother faces the very real potential of dying if carrying to term, that is different because someone will almost certainly die, but again almost every abortion is a matter of choosing to not carry to term and mostly that choice is based on convenience.
But on the other hand, given our socially suicidal safety net that encourages and subsidizes bad behavior, it also seems like abortion is providing a safety valve to cull and keep down the population that is adding nothing to America. That sounds horrible, I freely admit it, but in a sane society we would sterilize women who were on public assistance for more than six months and would cut off the social safety net completely after a predetermined time. We don't do that and instead have created an enormous permanent underclass of dependents on the state that now extends back many generations. Poor people are not necessarily bad people and in times past the poor were still productive members of the society by and large but now that is mostly not the case.
Should Roe v Wade be overturned as expected, it will accelerate the collapse of America and hasten the Great Replacement. Again according to Guttmacher, these are the states that are most likely to see abortion bans post-Roe. 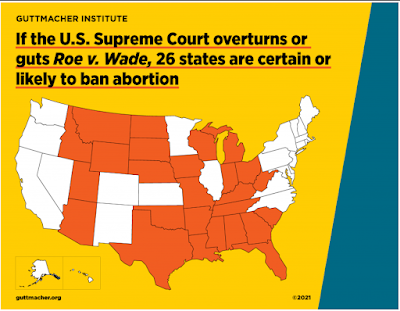 If you look a the list of states with the highest black population, five of the top six percentage-wise are in states that are likely/certain to ban abortion (Mississippi (38.71%), Louisiana (33.63%), Georgia (31.73%), Alabama (27.18%) and South Carolina (26.72%)). The state law that might overturn Roe is coming out of the state with the highest percentage of blacks in America. Other states on the map above like Texas, Florida, Georgia and Arizona are states with the largest mestizo populations. Without abortion, it is likely that the non-White populations in those states will increase more rapidly.
Again, it is horrible to look at something so grotesque as abortion in such pragmatic terms and even still I believe abortion should be illegal in almost every case but being a political dissident means looking at things based in facts and reason and that means looking at the real ramifications of abortion on the U.S. and the world as a whole. Abortion is a deeply emotional issue but sometimes we need to step back and look at things in the cold reality of life.
We might be on the cusp of getting the prize that so many of us have hoped and prayed for, the overturning of Roe v Wade but we also need to understand what an America without abortion might mean for the next 25 years. An honest assessment is very sobering.
Posted by Arthur Sido at 11:17 AM