Paving The Way For An (Actual) Coup 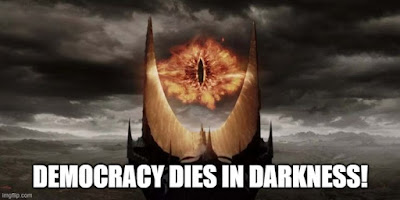 While most normiecons are getting revved up to VOTE MOAR HARDERER in the 2022 midterms, dreaming of a “red wave”, the political Left is already thinking about 2024. It makes sense, with an incredibly unpopular “President” who is already deep in dementia and a crazy, even less popular VP, there isn’t really a clear standard-bearer for Democrats in 2024. Having learned their lesson from 2016, they are leaving nothing to chance
Enter the January 6th, 2021 “insurrection”. For an event that boiled down to a couple of hours of people wandering around the Capitol building, it has taken on a life of it’s own and now is as much a part of American lore as Pearl Harbor and 9/11 thanks to a relentless media push.
Into this narrative comes a new “op-ed” in the official party organ of the Coruscant Uniparty, The Washington Post (Democracy Dies In Darkness!) by three retired generals warning of shenanigans and high treason in 2024 and calling for a deeper purge of the military (HT: American Partisan): Opinion: 3 retired generals: The military must prepare now for a 2024 insurrection 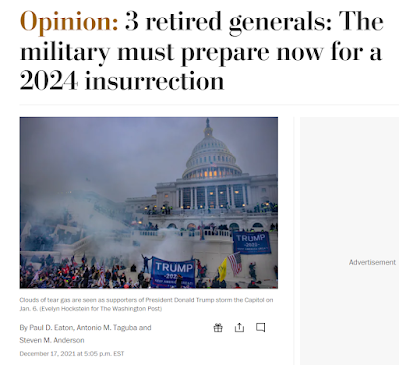 At the outset it must be reiterated: nothing makes it to the pages of the Mordor-On-The-Potomac Post unless it is approved by and advances the agenda of the ruling elites.
The three retired generals are:
Paul D. Eaton is a retired U.S. Army major general and a senior adviser to VoteVets. Antonio M. Taguba is a retired Army major general, with 34 years of active duty service. Steven M. Anderson is a retired brigadier general who served in the U.S. Army for 31 years.
I did a little sniffing around on these three fellas and was not at all surprised at what I found.
Paul Eaton has his own Wikipedia page where we are told he once worked for a “progressive” think tank and now works for a group call “Vote Vets” which is also a “progressive”, iow leftist, organization that pushes pretty standard leftist talking points and backing some far left veteran political figures. Eaton was also in charge of the outfit “training” the Iraqi military and we know what a crack outfit they turned out to be. From what I can see he mostly looks to have served in admin functions but someone with military experience can tell me if I am wrong. 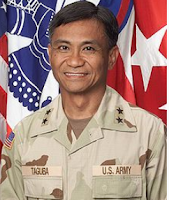 Antonio Taguba is a Filipino who rose to the rank of general and is most famous for being critical of Abu Ghraib. He also looks like a career minded pencil pusher, spending lots of time in staff positions.

He alleges he was pushed out of the service because of his criticism of the treatment of prisoners. He also accused the Bush administration of war crimes and sounds like an asshole carrying a chip on his shoulder.
The third guy, Steven Anderson, is harder to pin down. He has a LinkedIn page and I found a video of him supporting the Obama decision to shut down the Keystone pipeline but little else. He currently works for some Indian tribe, which is kinda weird.
Anyway,  the op-ed is full of the little girl screeching you would expect from an approved message about January 6th…
As we approach the first anniversary of the deadly insurrection at the U.S. Capitol, we — all of us former senior military officials — are increasingly concerned about the aftermath of the 2024 presidential election and the potential for lethal chaos inside our military, which would put all Americans at severe risk.
In short: We are chilled to our bones at the thought of a coup succeeding next time.
“Deadly insurrection”, neglecting to mention the only person directly killed as a result of the events was a woman gunned down by a Capitol cop. These three guys are all educated men and certainly can’t possibly really believe that January 6th was an “attempted coup”, given that no one was armed at all and no one seemed to have any sort of plan. Why do they repeat what they know to be a lie? Because the Left always lies and doesn’t have a qualm about it if it advances the agenda.
They seem very upset that some of the people meandering around the Capitol were vets and active-duty and that 124 retired military leaders voiced support for Trump. See, it is OK for retired military leaders to wave the flag to push a leftist agenda but not to support the President. The whole thing is ridiculous like this paragraph:
All service members take an oath to protect the U.S. Constitution. But in a contested election, with loyalties split, some might follow orders from the rightful commander in chief, while others might follow the Trumpian loser. Arms might not be secured depending on who was overseeing them. Under such a scenario, it is not outlandish to say a military breakdown could lead to civil war.
Notice that in their scenario, the only possible outcome is a “rightful”, iow Democrat, CinC and an illegitimate “Trumpian loser”.
It is December 2021 and these guys are already talking about a “military coup” following an election three years from now.
Their proposed solution to prepare the military is the really dangerous part.
Step one is to ramp up the propaganda within the ranks:
But the military cannot wait for elected officials to act. The Pentagon should immediately order a civics review for all members — uniformed and civilian — on the Constitution and electoral integrity. There must also be a review of the laws of war and how to identify and deal with illegal orders. And it must reinforce “unity of command” to make perfectly clear to every member of the Defense Department whom they answer to. No service member should say they didn’t understand whom to take orders from during a worst-case scenario.
I wonder what sort of political leanings the people giving the “civics review” might have? Your average military personnel, through no fault of their own as products of the public school system, probably have at best a rudimentary understanding of *actual* civics and would therefore be easy to propagandize with leftist claptrap.
The next two suggestions are far more ominous.
In addition, all military branches must undertake more intensive intelligence work at all installations. The goal should be to identify, isolate and remove potential mutineers; guard against efforts by propagandists who use misinformation to subvert the chain of command; and understand how that and other misinformation spreads across the ranks after it is introduced by propagandists.
Identify. Isolate. Remove. Those are words used for a political purge. What this boils down to is a secret police within the military to clamp down on political speech, association and thought. Far left ideologues will be ignored while any whiff of right-leaning politics will be crushed. I would assume this would include incentives to snitch on your fellow service members who maybe read the wrong sort of social media or associate politically with the wrong sort of people. I can’t imagine something more likely to further erode unit cohesion than constantly having to look over your shoulder, worried that some trannie in your unit is informing on you up the chain of command.
Finally this:
Finally, the Defense Department should war-game the next potential post-election insurrection or coup attempt to identify weak spots. It must then conduct a top-down debrief of its findings and begin putting in place safeguards to prevent breakdowns not just in the military, but also in any agency that works hand in hand with the military.
The DoD “war-gaming” the aftermath of the next election? How could that go wrong?
During the events of January 6th, the military was specifically and correctly ordered to stay out of it by Secretary of Defense Christopher Miller. The three generals that put their name on this steaming pile of dog shit criticized him by name for this, apparently preferring to see the military get involved in what at worst was a civilian law enforcement matter. This is the mindset that saw D.C. become an armed camp with the military occupying the Capitol area and fencing erected around “The People’s House” to keep The People out. 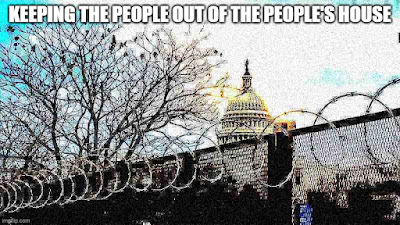 These are only three former generals but the messaging is dangerous. The military must stay out of the civilian political process to prevent it being used as a means of controlling the country. The safeguards are in place for a reason and there is a reason why we have a civilian law enforcement apparatus distinct from the military. This scene from BSG contains a powerful message. When the military, tasked with fighting the enemies of the state, assumes the role of police, tasked with serving and protecting the people, all too often the people become the enemy of the state and that is dangerous as hell.
Just to be clear, on January 6th, 2021 not only was there no hint of an “insurrection” or “attempted coup”, there was also no interference in what was a civilian matter by the military. This is as it should be.
What retired generals Paul D. Eaton, Antonio M. Taguba and Steven M. Anderson are talking about is weaponizing the military to enforce the political will of the Left by purging the ranks of anyone who is insufficiently leftist or at least anyone with openly right-wing opinions and creating the framework for using the military to enforce the political will of one party at the expense of any other political party. They are aiming for Soviet Union style “democracy” where everyone votes but only has one party they are permitted to vote for. Again, these men are upset that the military wasn’t called out to act against the citizenry of the United States because some people were trespassing on public property.
The slippery slope argument is often considered a rhetorical fallacy but in reality it is invoked so often because it is so often true. Once we head down the path of using the military where civilian law enforcement suffices, we are on a path to despotism and civil war.
The official party organ of the elitist ruling class trots out three retired generals to advocate for weaponizing the military for civilian political purposes while waving the banner of “Democracy!”. Makes you wonder if we really “won” the Cold War at all.