There are a couple of great ways to keep right-Wing Whites from organizing at more than a "frens and naybors" level:
The first: any time any group gets to a significant size, find ways to infiltrate the group with undercover agents and informants. The Feds spend lots of money on this activity according to this post:

The best part of the article is that some of these people apparently have no idea why they are being paid and the Feds are actually authorizing these informants to commit crimes:

The other is to convince everyone on the right that every single group is riddled with informants so no one will join them except autists and retards.
Either one works for keeping the right disorganized and suspicious of one another.
The reason I bring this up: a recent Patriot Front rally in D.C. that got a lot of media coverage and then received a lot of the same basic response from /ourside/:
FEDS!
It is understandable. Most people hadn't heard of Patriot Front until just recently so it seemed like they came out of nowhere and showed up in D.C. with a pretty large crowd of guys with a great deal of coordination. You can see pics of the rally on their Gab page: 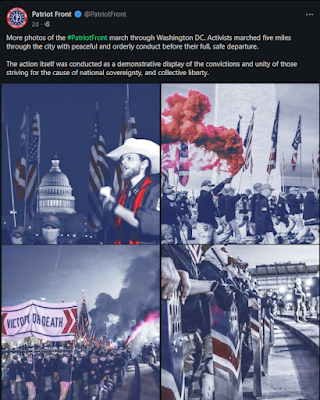 We are pretty deeply conditioned to assume that the group is indeed full of Feds or itself a full blown Fed op. I have known about these guys since they came around in 2017 but like I said, many on /ourside/ never heard of them and that got the glowie alarms going off like crazy. 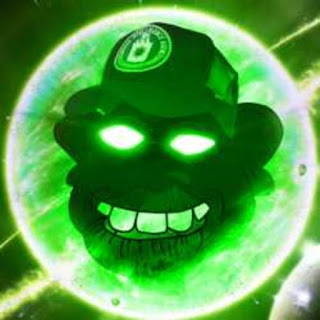 Are they a glow-op? I have no idea. It is quite possible but it is also possible that they are a legit group that certainly has a few Feds in the ranks. Regular men can organize and coordinate actions without it being a set-up. The 2A rally in Virginia a few years ago is an example, while Unite the Right in Charlottesville was the opposite.
Anyway, I have never interacted with the Patriot Front guys. No idea what their deal is, but I like at least some of what they say and do. Their logo is going to rub people the wrong (?) way: 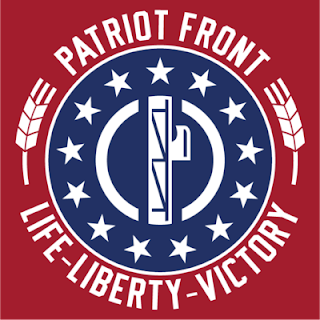 It evokes a lot of the early 20th century Austrian painter with the funny moustache imagery but the ideas behind it are at least as deserving as most of what passes for serious political theory in the 21st century. Yes there is a fasces in the middle of the logo but you know where else you find fasces? Lots of  places... 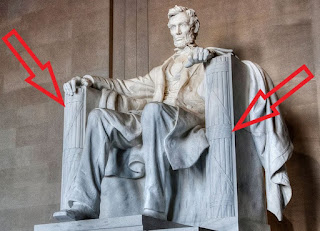 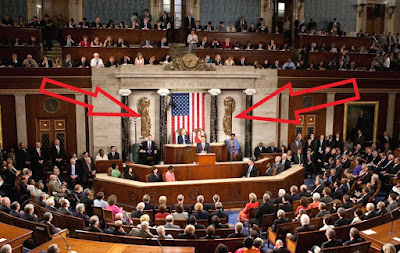 There are a ton of places in official U.S. government seals and symbols where it appears.
Speaking more broadly, what role can large, national organizations play in the dissident right community? Did the pop up rally in D.C. accomplish much? Not really anything concrete although I bet their web traffic at Patriot Front went through the roof. It certainly raises awareness and hopefully gets people thinking about some of these issues outside of the guidelines drawn up by the Uniparty hacks. It won't ever accomplish anything nationally because there simply are not enough people who are going to get involved. Even these guys mostly are mostly covering their faces because for most people, being associated with a group like Patriot Front is going to get you labelled all sort of bad things because normies are only going to believe what they see on Wikipedia: 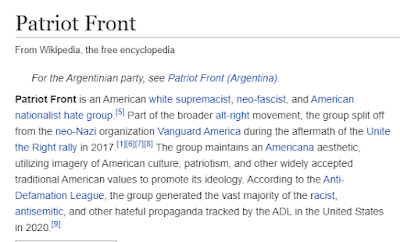 You get all the scary buzzwords there: White supremacist, neo-Facist, "American nationalist hate group", alt-right, Neo-Nazi, racist, anti-Semitic, etc. Being ID'd at their rally means the end to most careers and probably loses you lots of friends and family.
As I said, I don't have any affiliation with the group but I also don't have much I disagree with when it comes to their stated goals and positions. It might be worth checking out, although the first whiff of something organized that even skirts the line of being illegal would mean it was time to bail. If I were running an organization, the leaders would be exclusively drawn from middle aged guys with actual families. It is way too easy to embed a Fed who is late 20s without a wife and kids.
Anyway, I don't know if they are Feds and neither do you unless you have some sort of tangible proof. So good for them for saying things that need to be said and doing stuff that most of us aren't going to do because we don't want to get in trouble. It may not be your cup of tea but let's not reflexively assume everyone is a Fed, especially when we don't know anything about them.
Posted by Arthur Sido at 7:16 PM