Saw this news story on The Epoch Times
Corporate Insiders Sold Record Level of Stock in 2021
Some of the biggest names in the corporate world sold a record $69 billion in stock this year as share valuations surged to record highs, new data from Securities and Exchange Commission (SEC) filings show.
According to the latest numbers from InsiderScore/Verity, via CNBC, sales by CEOs, founders, and corporate insiders have climbed 30 percent from last year to $69 billion. This is also up 79 percent compared to the 10-year average.
At the top of the list of these sellers are Elon Musk, selling off $10 billion, and Jeff Bezos right behind with sales of $9.97 billion. 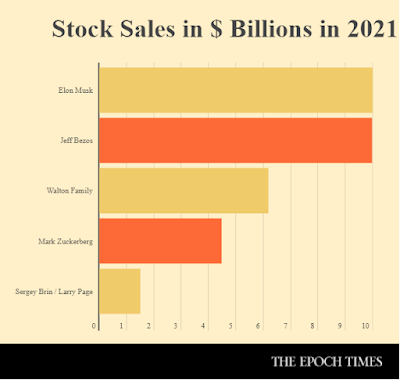 Of course this is all relative considering that our "money" is fake and gay so stocks valued in our "money" are even more fake and gay. It is all paper returns until you sell it out and do something else with the "money".
So what is really going on?
First, stock values are ridiculously overpriced.
Looking at a five year chart of the S&P 500, a broader and therefore more useful index than the Dow Jones, we see numbers that are startling. I have been out of the financial sector for several years and not paying attention so I was rather shocked at this:

On December 11, 2016 just a few weeks after the election the S&P 500 was at 2,258. With a couple of corrections along the way it took off from there and really exploded after Joe Biden was "elected". It stood as of Monday at 4,591. For those math challenged among us, like me, the S&P 500 more than doubled in 5 years. Looking back 20 years shows how out of control the prices really are....

Are American corporations worth twice as much today as they were five years ago? Of course not. Not to get all Zero Hedge on you but this is a market screaming for a correction and by correction I mean a huge drop. Don't worry, the big players will have plenty of warning but the average investor is about to get a kick in their financial junk. A billionaire can survive a huge correction but for a retail investor close to retirement, when you add in raging inflation, a big drop is going to set back their plans for retirement. This is why you need an alternate plan other than "work until 65, save in 401k, retire and live off your investments".
Second, as noted in the story there is a real chance that a significant increase in tax rates, especially on stock sales, might be coming soon. A 5% increase on a $10 billion sale is $500,000,000 and that is big money no matter who you are.
The same people selling off their stock also own the political class so they will have plenty of time to get their wealth protected before any changes take place. You won't have the same warning.
Third, there is a simple matter of inflation. Wages going up means people have a higher salary and therefore more money going into mutual funds. One person making a grand more a year is meaningless, but 50 million people making more every year? That starts to compound quickly, especially since so many people are invested via their 401(k) in S&P 500 Index funds and target date funds.
Finally, we are also seeing these billionaires turning their imaginary stock "money" into more tangible assets.
You might recall a prior post, Like Feudalism Without The Peasants, where I looked at the quiet accumulation of enormous amounts of land by the landed gentry billionaire class. Bill Gates is already the largest owner of farmland in America and Amazon's Jeff Bezos is quickly building his own empire. One billionaire, named John Malone, owns the equivalent of two states.
To put this in perspective, John Malone owns 2,200,000 acres of land. There are 640 acres in one square mile so Malone owns 3,437 square miles. Delaware is about 1,900 square miles of land and Rhode Island is 1,033 square miles counting just land.
John Malone owns more land than the total area of the two smallest states combined.
Stock prices come and go but land is an asset that is permanent and they ain't making any more of it.
I don't know for sure that these billionaires cashing out of their company stock are investing in land but I would bet all the money I have on hand that a good sized chunk of it is being turned into real estate.
As always the key is to tie stories together, creating a picture of what is really going on from a bunch of seemingly unrelated pieces. When people like Elon Musk and Jeff Bezos cash in tens of billions in stock, it has repercussions on far more than a single ticker symbol on Wall Street. Thanks to raging inflation and favorable treatment from the government, America's wealthiest have more "money" than ever before and they are turning that phantom currency into the sort of wealth that the robber barons could only dream of. None of it is good for the rest of us.
Posted by Arthur Sido at 12:23 PM