Another of Arthur's Rules To Live By:
The more a man squawks about feminism, the more likely he is to be a real misogynist. The louder he squawks, the more he hates women deep down.
So getting back to the pedo CNN producer John Griffin. There are more details coming out about his "grooming" of the young daughters of these whores who were apparently willing to trade their daughters for money: CNN producer accused of child sex crimes once decried growing news stories of child abuse cases in old tweet
These are some of the things Griffin reportedly was saying, highlights in red mine.
The indictment, which was sealed when the arrest was first reported, provides lewd particulars of crimes allegedly committed by the CNN senior producer. The indictment includes various messages Griffin sent via Kik, Google Hangouts, and texts. Griffin stated he believes there is a "wanton whore" at "the core of any" female and that "a woman is a woman regardless of her age," according to messages included in the indictment.
According to the indictment, Griffin sent text messages to a mother of two daughters, ages 9 and 13, which stated, "One of the big lies of this society is that women are delicate innocent angels and they are in actuality, naturally, the dirtiest sluts possible, in EVERY metric."
The CNN producer also allegedly texted the mother, "When handled appropriately, a woman is a woman regardless of her age" and urged the mother to make sure her 13-year-old daughter was "trained properly."
The U.S. Attorney's Office in Vermont wrote in a statement that Griffin "sought to persuade parents to allow him to train their daughters to be sexually submissive." ...
... The now-unsealed indictment indicated he had "sexually trained girls as young as 7 years old" and advised a mother that her 14-year-old daughter "would be a good candidate for such training." He allegedly proposed that training would begin on a video chat where he "planned to instruct the 14-year-old and her mother to remove their clothing and touch each other" and eventually declared in-person meetings would include "spanking" and "c--k worship."
Huh. Besides being a degenerate, it is also clear that John Griffin hates women. 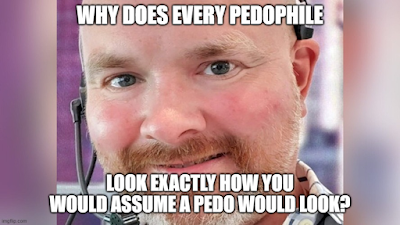 To be a senior producer at CNN would mean a lengthy career in media. According to the linked article, he worked at CBS for a couple of years, Fox News for over three years, ABC News almost 8 years and then joined CNN in 2013. In order to work your way up the ladder in one of the most far-left occupations around, you have to be saying the right stuff and that means talking about "respecting wahman" and "believe all wahmen", all of the GURL POWAH stuff.
John Griffin certainly repeated the talking points but clearly didn't mean it and what is more, like most liberal men, lying about his feelings about women created a hatred for those same women deep in the recesses of his degenerate mind.
Gaige Grosskreutz, the guy Kyle Rittenhouse shot the arm off, was a good liberal guy protesting for black Lives Matter. And he was also a stalker who was charged after he smashed his ex-girlfriend's window and before that for hitting his grandmother in the face. Too bad Kyle didn't cap him but his testimony was key to Kyle's acquittal. One of his liberal buddies who ate a few of Kyle's rounds and died as a result, Joseph Rosenbaum, was a convicted sex offender who had molested at least 5 boys. The other guy who became a good Communist thanks to Kyle, one Anthony Huber, was a repeat domestic abuser of women. Nice guys, all good liberals.
Who can forget Al Franken, the Chosen Senator from Minnesota and another good liberal guy? He was forced out of office after a number of women, 9 at last count, accused him of various sexual assaults and general misconduct, particularly this photo of him pretending to grope Leeann Tweeden while she slept. Andrew Cuomo was another, the governor of New York and a good liberal, who got handsy with lots of young women. Or CNNs Jeffrey "Jerking Off On Zoom" Toobin who knocked up a woman and then threatened her if she didn't abort the child. Pro-choice, amirite! Based on what I have read, it seems more likely that Toobin intentionally exposed himself masturbating on the Zoom call. When Sarah Palin was on the McCain ticket the grotesque and perverted sexually explicit statements about her all came from the same leftist men.
You get the point. Many of these good liberal men secretly, or not so secretly, hated women, harbored weird and creepy fantasies about them and sometimes acted out on those fantasies by groping women or using their power to force women into sexual situations, at least as much for the power trip over a woman as for the sexual gratification.
It is patently clear that at the deepest level men and women are hard-coded to interact in certain ways with one another. You don't have to teach a man to feel protective of his wife and children, you don't have to teach a woman to be empathetic and nurturing toward husband and children. Sure you need to teach them some specifics and reinforce good behavior while discouraging the bad but the foundations are already there.
But if you want them to act contrary to human nature? That requires some heavy duty conditioning and conditioning like that running counter to human nature invariably seems to cause a mental and emotional backlash. Young women who rebel against gender roles don't just stop wearing skirts, they often go completely loony, mutilating their flesh and trying to look as unfeminine as possible. Homosexual men don't act like regular dudes who like buttsex with other dudes, they get as flaming and faggoty as possible.
This is the same with men, especially in prominent roles, who have to pretend to be "feminists" when what they really want is to spank women and humiliate them for making them pretend to believe all of that feminist crap.
I grew up in a traditional family and have been in a marriage for 30 years with very traditional gender roles for the most part. We would both agree that it has worked great. We also live among people with some of the most rigid gender roles to be found anywhere and divorce is non-existent and both the men and women seem quite happy and have no interest in seeing anything change. I don't hate women and I don't want to beat them up or humiliate them. Weird that as someone who would be labelled a misogynist by the Left, my attitude toward women is far more caring and a lot less creepy than so many "male feminists". No spanking or treating them like whores for me.
Deep down almost all leftists are self-loathing. They hate themselves and they hate everyone else and often the more they pretend, the deeper the hatred. White liberals talk about black lives mattering but live as separately from blacks as they can. Leftists talk about the working poor while living in expensive neighborhoods and shunning any honest labor. And leftist men talk about feminism and the importance of women while deep down wanting to hurt and humiliate those same women.
No wonder these people are all insane.
Posted by Arthur Sido at 3:50 PM