The black nationalist that drove through a crowd of mostly White people, killing six of them, gave a jailhouse interview and the coverage of his mass murder has him feeling a little down.
Waukesha parade suspect Darrell Brooks says he feels 'dehumanized,' 'demonized' in first jailhouse interview
Well that makes me feel just awful, the last thing I want for a mass murderer is for him to feel demonized after slaughtering a bunch of people, like these six who clearly had it coming for being in the street when he wanted to drive on it. 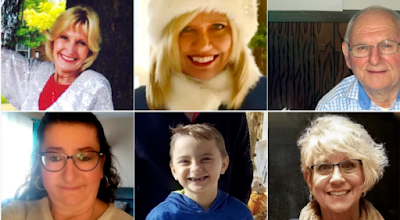 Meanwhile his piece of shit mama is blaming....the criminal justice system for "failing" her son.
Not even his mother has dropped by, he said. Earlier in the day, she released a statement on behalf of the family decrying Wisconsin’s criminal justice system for failing her son, a longtime felon with a 50-page rap sheet detailing domestic violence, firearms, drugs and other convictions in Wisconsin, according to documents obtained by Fox News Digital.
Maybe she might want to look in the mirror if she wants to blame someone. Hard to imagine a person with a mama like that grew up to be such garbage.
Posted by Arthur Sido at 8:31 PM