Australia Style Covid Gulags Are Still In The Works

Almost one year ago, I posted an article about New York State House Assembly Bill A416. You can and should read that article here:

Gulags Are A Go
Well it is a year later but the dreams of concentration camps for the unvaxxed are still haunting the sleep of the neo-Bolsheviks in New York State. The key takeaway, other than camps for the unvaxxed, is the intent to use a “public health emergency” as a legal pretext to circumvent due process. You should read the post linked above.
I hadn’t thought much about that issue, thinking it probably died a quiet death, but I was mistaken because I saw this:
New York Legislation Provides for Indefinite Detention of Unvaccinated at Governor’s Whim.
On January 5th, 2022, the New York Senate and Assembly will vote on a bill that would, if passed into law, grant permissions to remove and detain cases, contacts, carriers, or anyone suspected of presenting a “significant threat to public health” and remove them from public life on an indefinite basis.
Yeah they are finally getting around to an actual vote on this bullshit.
As I said, it is bad enough that they want to forcibly imprison people even suspected of being a “significant threat to public health” but far worse is that the definition of what constitutes a “public health emergency” is expanding all the time, now including “racism” and “gun violence”. If harboring any less than approved opinions is a “public health emergency”, you can see how easy it will be to get you locked up.
This is how it starts.
Totalitarians have always found excuses to institutionalize and imprison their political enemies. Just remember, if you get into the boxcar, you probably aren’t coming back. 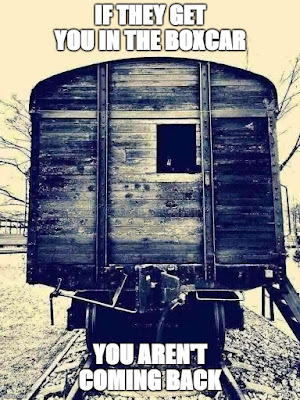