We Need To Be A Lot Smarter In Our Arguments

The regular reader will note that I write about the mass shooting situation in America fairly often. In general I use the definition provided by the Gun Violence Archive, a leftist outfit, of a mass shooting being four or more victims:
While they are generally grouped together as one type of incident they are several with the foundation definition being that they have a minimum of four victims shot, either injured or killed, not including any shooter who may also have been killed or injured in the incident.
That is a pretty expansive definition and one a lot of 2A people don't like because it leads to staggering numbers like this from GVA: 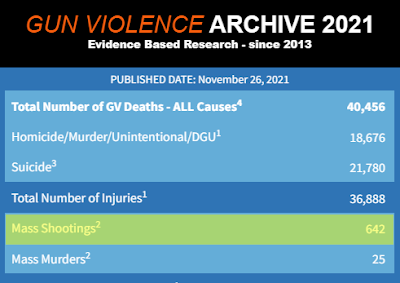 Lots of pro-2A people see that and panic because it seems like we really do have a gun violence problem in America. They often will quibble about the definition but that is absolutely the wrong way to go about it. That brings me to Lee Williams, who blogs at Substack under "The Gun Writer". I subscribe to his feed, it doesn't really ever have much new that I didn't already know but I like to support our people. I saw a new post of his in my email and the title caught my eye so I read the whole thing:
Huh? CNN claims there have been 641 mass shootings this year — almost two per day
That number is from GVA and the media will use it for their own purposes. Lee sputtered about how he had already "debunked" the methodology that they use:
The problem is how Bryant and his 20 staffers define mass shootings. When most people hear the term “mass shooting,” they picture a crazed gunman stalking the halls of a school or a shopping mall, coldly and randomly executing innocent young victims. What does not come to mind are rival drug crews shooting it out in Chicago or Detroit, or a madman murdering his entire family, which no sane person would consider a mass shooting. The GVA makes no such distinction. If four people are wounded, the GVA labels it a mass shooting regardless of the circumstances, and the media and anti-gun politicians lap up the GVA’s inflated stats.
According to Bryant’s all-inclusive definition, there were 417 mass shootings in 2019. The FBI says there were 30, because it uses a much narrower and more realistic definition. You decide which figure is more accurate and more honest.
Williams claims that CNN has been "hoodwinked by the inflated GVA stats". No Lee, they have not been "hoodwinked", they know exactly what those statistics seem to present. The other problem? Most normies are going to simply accept the definition presented by the media without questions and arguing semantics about which definition to use is absolutely a waste of time. What isn't a waste of time is to cede to them the definition of a mass shooting and then ask some follow-up questions. Here is what I wrote in response to his post:
That isn't really "debunking" them, they are open about their definition which many media outlets use. The fact that they are a leftist group actually works against them if you use their definition because it captures most of the near daily gangland shootings that are almost exclusively black on black. The average low information normie thinks that most mass shootings are committed by White men, which is not true, so using the definition and data provided by the GVA puts people into a corner of explaining why over 600 mass shootings in the US get so little coverage: because the shooters are black and the guns are illegally possessed handguns, not scary AR-15s. We need to be smarter about countering their arguments, rather than demanding they use a different standard it is far more useful to use their own standard to undercut their argument.
See what I did there? When addressing their argument, I don't try to play word games but instead say: "OK let's use your definition. Now, how many of the 642 mass shootings in America this year have you heard about? I bet not more than a handful. Why do you suppose that is the case?".
Now the person I am questioning is forced into a corner. They want to say there are hundreds of mass shootings per year but they are also faced with answering my question. Of course we know the answer, you don't hear much about those mass shootings because they are blacks shooting other blacks, to the tune of hundreds upon hundreds of incidents per year. They are also not generally using an "assault rifle" but rather are just using a pistol that is already illegal for them to own owing to prior felonies (or course it is also already illegal in most cases to shoot people and that isn't stopping them either). The point is that the vast majority of America doesn't have a gun violence problem, only a particular segment does. We have a black violent crime problem, not a gun problem.
Getting into the weeds about definitions is a waste of time. That is why I don't bother trying to defend myself against charges of being racist or homophobic or antisemitic or whatever. It is a losing proposition 100% of the time. I ignore the charges and focus instead on what I want to talk about, instead of letting them derail the conversations by calling me names and getting me to chase the stick. I refuse to play their game and it is frustrating to them because they are understandably so used to us allowing them to dictate the terms of the argument.
The Left is great at word games, better than we are. Don't play that game with them, and instead use the words they have chosen against them. We need to be smarter. Of course the smartest thing is to not bother arguing with them at all but all of us fall into that temptation so if we are going to argue with them, use a winning strategy.
Arthur Sido at 1:20 PM
Share