Things That Are Smart

Just saw this on Twitter and had to check it out. 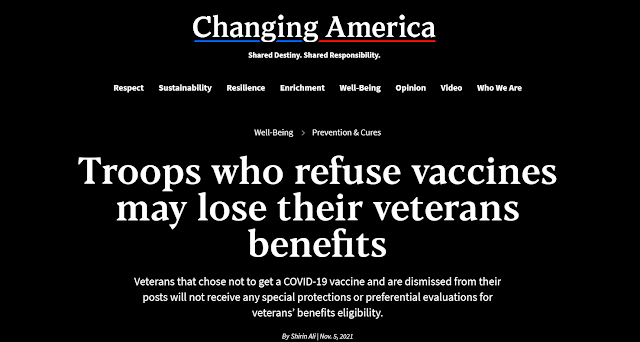 I am not a veteran but I am pretty sure that guys we taught to kill other guys, guys who maybe spent a few years getting shot at by haji in some shithole and maybe seeing their buddies get killed, who are now being told that the promises made to them are null and void if they don't submit to a shot that doesn't keep them from getting nor spreading to others a vaccine that statistically speaking poses no threat to the demographic that is in the military, aren't going to take this well.
Meanwhile this is going to further enflame the betrayal of these men we spent lots of money training to kill as they are driven from the military and potentially denied their earned benefits.
That seems like a good idea. Almost like they are trying to trigger some White veteran into doing something as an excuse to further crack down and purge the military.
Posted by Arthur Sido at 3:15 PM