Jurors in Brunswick, Georgia, on Wednesday found Travis McMichael and his father, Greg McMichael, guilty on nearly all counts, including felony murder, capping off an intense trial surrounding the February 2020 shooting death of Ahmaud Arbery.
Jurors also found the McMichaels' neighbor, William "Roddie" Bryan, guilty of felony murder.
Travis McMichael, 35, was found guilty on all counts, and Greg McMichael, 65, was found guilty on eight after they shot and killed Arbery, a 25-year-old unarmed Black man, while he was on a run in a neighborhood outside of Brunswick.
Even Fox News repeats the lie that he was "on a run" when there is video evidence that he was fleeing from a house under construction where he was trespassing. That isn't "jogging".
This is another case where the verdict was based in large measure on the threat of violence if they were not convicted. black "activists" have been at the courtroom for weeks and threatened to riot if they didn't get their vengeance. 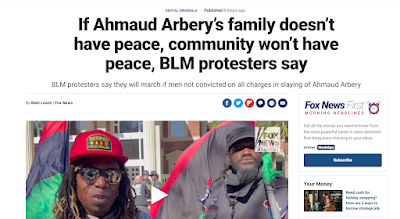 Add a few more names to the list of American political prisoners and tap another nail into the coffin of the U.S. judicial system.
Posted by Arthur Sido at 2:52 PM